HACKENSACK, N.J. — Over 2,000 motorcycles are expected to roll past New York’s “Ground Zero” on Saturday, May 10, as they participate in the “Freedom Run” motorcycle rally and festival. Riding side-by-side, the motorcycles are anticipated to stretch for five miles and will pay tribute to the 9/11 first responders of the FealGood Foundation who are now gravely ill as a result of their service at the site of the World Trade Center collapse.

“I am overwhelmed by the outpouring of love from the motorcycle community. We are grateful for the support of Bergen Harley-Davidson, and pledge that every dollar raised will help give dignity to a 9/11 responder who has been forgotten by their government,” says John Feal, president and founder of the FealGood Foundation. The nonprofit organization advocates and raises money for the 40,000 who came from all over America and the world to do search, recovery and clean up at Ground Zero, 70 percent of whom are now sick or have died. 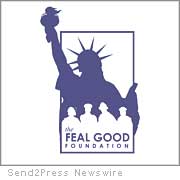 Leading the motorcycles will be NYFD Engine #343, named in honor of the 343 NYC firefighters who perished in the attacks, which will be ridden my numerous rescue workers and first responders. The run will depart from the Hackensack Court House, 10 Main Street, at 11:00 a.m., and travel across the George Washington Bridge before passing the Ground Zero.

At the site, motorcyclists will pay homage to a police and fire department color guard before proceeding through the Holland Tunnel and out to Liberty Island. The pack arrive at Liberty State Park at roughly 1:30 and take part in a festival of food, live music by The Rolling Bones, motorcycle high wire thrill show, fly-over by the War Birds historic military aircraft, and more.

“This is an unprecedented event here in the New York and New Jersey area,” says Liz DiGennaro of Bergen Harley-Davidson-Buell, sponsor of the event. “We hope it will bring attention to the real American heroes who spent days and months sifting through the rubble of the burning buildings looking for survivors and bringing dignity to those who perished.”

The police-escorted run and festival are free and all models of bikes are welcome. For more information or to register call 201-843-6930 or visit http://www.FealGoodFoundation.com.

Spodak Dental Group Provided Military Veterans and Their Families, and First Responders, with More Than $10,000 of Free Dental Care During Freedom Day USA 2020