GILROY, Calif. — The hardships, struggles, hopes and triumphs of the men and women who served in World War I and World War II is wonderfully captured in “Letters From Heroes” (ISBN: 978-1-58909-570-0), by Edward T. Cook, a new book just published by Bookstand Publishing. This poignant collection of real letters from real servicemen allow the reader to see things through the eyes of these soldiers and understand their thoughts about war, training, sickness, the enemy and even their food. “The great wars are part of our history,” says author Edward Cook. “The men and women who served in our armed forces during them should never be forgotten for the sacrifices they made. For, after all, they are all heroes.” 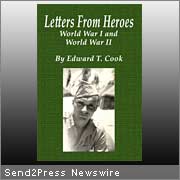 “I would like to think that every soldier is a hero,” says Cook. “A hero to his nation, a hero to his family, and a hero to himself. That person could be a barber, electrician, cook, clerk, or doctor. That person could be a private or a general. They are all heroes in somebody’s eyes. Many were drafted, others volunteered, and some wanted to make the armed forces their career. It takes a combination of men and women to make up our armed forces. They all have a job to do, and they do it well. They give their time, their sweat, and even their blood for our great nation. They are away from their families for months or years. They see death, they see happiness, and they see themselves as doing a job: To protect our freedom and freedom for others. They willingly make that sacrifice for their country.”

“I published this book,” says Cook, “because I wanted to document these letters and get it out to the public. I didn’t want these memories to be lost forever.”

Edward T. Cook is the author of four other books, including “The History of the 104th Combat Engineers,” “Guiding The Way From Middle Neebish,” “Stars & Shields: Cop Stories,” and “Murders Do Not Come by Accident.” He is a member of the Military Writers Society of America. His website is:
http://home.att.net/~e.t.cook/wsb/html/view.cgi-home.html-.html

Letters From Heroes is available from: