LOS ANGELES — Italian-born filmmaker Zak Lee Guarnaccia with ZASH Productions has just completed producing and directing his first feature film, an action / thriller / horror project titled, “Rules” inspired by a true story. Zak is an award winning actor, world martial arts champion and fitness expert with several successful exercise videos on the market. Zak was also inspired and motivated by the WGA strike and the threat of SAG strike, which is why he used the down time to produce the no-budget film “Rules.” 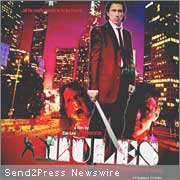 This rugged performer possesses the passion of Antonio Banderas and the intensity of Gary Oldman, along with a dash of an Italian attitude thrown in for spice. Zak has appeared in numerous films and television series including: Zak’s comedic actor talent gets revealed in the romantic comedy feature film, “Everybody Wants To Be Italian,” theatrical release September 5, 2008.

Zak has also guest starred on “Medium” (NBC), “Sister’s Keeper,” “The Boss,” “Honor,” “Martial Law,” “Vanishing Son,” “Fist of the North Star,” and “Power Rangers.” He recently sold the action / thriller screenplay “Hands of the Dragon” (AKA “The Collector”) to Birch Tree Entertainment, which is currently shooting. Zak lives in Los Angeles and he’s available for interviews.

“RULES” Inspired by a true story

With its dark horror-crime underworld storyline and outlandish martial arts action, The Rules combines elements of the Oscar winning film Cape Fear with the indie cult hit Swimming with the Sharks. As an offbeat action film, it tells the story of a mysterious Italian, who as a nightclub security guard, threatens the customers and exacts his personal revenge as he tries to deal with his personal issues. The film also shares similarities with the hit films, “Old Boy” and “The Transporter.”
“Would you always listen to your intuition?”

Film is in post-production. For more information visit the RULES website at http://www.rulesfilm.com.