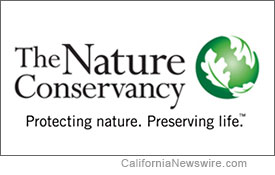 SAN FRANCISCO, Calif. /California Newswire/ — This week, for the first time ever, an analysis of the state of California Coastal salmon and restoration efforts has been completed and released by The Nature Conservancy, using data provided by The Department of Fish and Wildlife, water districts, private entities and local watershed organizations. With California experiencing the steepest decline in salmon populations in the west – with seven of the 10 coastal California salmon and steelhead species federally threatened or endangered – these Salmon Snapshots will be an important tool for conservationists.

California’s iconic salmon are imperative to the state’s economic, recreational and environmental welfare. Prior to now, there has been no easily accessible way to determine how many salmon are actually in the state’s coastal watersheds.

“This is the most comprehensive salmon information in California, and these Salmon Snapshots will help guide state-wide salmon recovery and investments in the places where we can have the greatest impact,” said Lisa Hulette, director California salmon initiative, The Nature Conservancy.

“Salmon not only are important to our rivers and California’s legacy, but are also a cornerstone of our economy,” said Congressman Jared Huffman (D-CA). “Coho salmon have virtually disappeared in some areas of California, and in other areas they are teetering on the brink of extinction. Empowered with tools like the Snapshots we can catalyze effective, smart action that can change this reality.”

“Salmon are an iconic species of California and a vital component of the culture of Native American tribes on the North Coast,” said Assemblymember Wesley Chesbro. “These fish are also a keystone species of coastal ecosystems, which are extremely rich biologically when healthy. There’s no better indicator species of the health of our coastal environment than salmon. The Snapshots promise to be an important assessment tool.”

Currently, information on the number of spawning salmon in California coastal watersheds are unknown or not widely available to the public and not in a single location, making it difficult to for the public to be informed, guide policy and conservation actions, and to measure results and cost-effectiveness of specific habitat restoration. Salmon were once an important part of the landscape across California, but now many people might not even know they have these fish in their watersheds. In other Pacific states, financial and political support for state agencies to collect and report this type of information has been both greater and has a longer history. California has now commenced the Coastal Monitoring Program (CMP), to represent a comparable effort. These Snapshots are the first reports to utilize steelhead and salmon data collected by the CMP.

“Compiling the population information for watersheds across the entire State was a big task for the California Department of Fish and Wildlife and something they had not done before. This has been a tremendous partnership with the Department, and The Nature Conservancy thanks them for this effort and will work to help get support and funds for coordinated, future salmon monitoring,” said Hulette.

“The Nature Conservancy has a long and respected reputation for providing valuable information to the public and policy makers on vital wildlife and natural resource issues and is a leader in collaborative approaches to conserving these resources,” said Kevin Shaffer, program manager of anadromous conservation and management, California Department of Fish and Wildlife. “The Snapshots demonstrate how important steelhead and salmon are to so many people, and these reports provide useful and accessible information that will allow the public to both track the progress of conservation and to appreciate the great diversity of places where these fish and people exist together.”

Using data provided by the California Department of Fish and Wildlife and watershed groups, The Nature Conservancy developed Salmon Snapshots for 37 coastal watersheds with the goal to:
* Target future restoration efforts on the places where salmon have the greatest chance to recover
* Provide a clearinghouse for salmon population information
* Encourage organizations to prioritize monitoring
* Highlight watershed restoration efforts

“While California’s iconic salmon are in decline, with the endangered coho salmon at risk of extinction in our lifetime, there is strong commitment to salmon restoration in California,” said Jeanette Howard, associate director of science, freshwater, The Nature Conservancy. “The Snapshots found that since 2000, more than 1,200 restoration projects have been completed in salmon and steelhead watersheds.”

Equipped with information on the actual state of California salmon, The Nature Conservancy will work with legislatures, agencies, conservation groups and stakeholders to generate support for the coast-wide monitoring program, build awareness of the plight of salmon and improve salmon conservation effectiveness by targeting funding to those places where salmon populations are increasing and restoration efforts have the greatest chance of success.

“The Nature Conservancy’s Salmon Snapshots honors the Endangered Species Act’s 40th anniversary by partnering with agencies, non-profit groups and the public to bridge the gap between science and information. We applaud this monumental step to unify and focus action for the many Californians who vision rivers running abundant with salmon and steelhead as they were just 40 years ago,” said Charlotte Ambrose, salmon and steelhead recovery coordinator for NOAA Fisheries. “We appreciate the long standing collaboration we have had with The Conservancy and their support for NOAA’s salmon recovery goals.”