SPOONER, Wis. — With the sparring behind the scenes rivaling the boxing superstars in the ring, Native Voices Foundation’s (NVF) “Future Olympian’s Day Benefit in Spooner April 16, turned out an uplifting landmark for American Indian youth competing in the London Olympics,” according to Olympic skier, Suzy “Chapstick” Chaffee, NVF’s organizer. 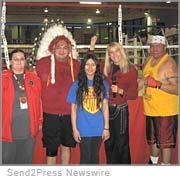 gaiashkibos (Lac Courte Oreilles), National Congress of American Indians Secretary, joined Chaffee in welcoming and cheering on Future Olympians in boxing, skiing and archery… “I am committed to helping give Indian youth their Olympic Dreams,” he said.

“gaiashkibos could have been an Olympic basketball contender if his community could have afforded to give him a hand,” said Suzy. “Now together we can,” he said. For standing up for Indian youth, Nancy Cooper (Ojibwe), the coordinator, honored him with a buffalo robe.

“Whenever our people can get Olympic quality coaching and conditioning, they win championships,” said Stonehorse Goeman, Seneca Marshal Arts Champion and conditioning-coach for Indian Olympic Boxing talent at Foxwood’s Casino.

“Only one Native American woman, Naomi Lange (Karuk ice-dancer), has competed in the Modern Olympics,” said Cooper, whom Suzy called a “Heavyweight Champion for youth.”

Eat Your Words 2021: A Fundraising Event for Chicago Youth

Now Deliver High-Quality Voice Over at Scale with Voices Enterprise from Voices.com