Mountain View, Calif. — Thursday evening in Copenhagen, Napatech received the prestigious national Ernst & Young “Entrepreneur Of The Year 2008” award in the category “Venture Backed Innovation.” The award was based on Napatech’s success in establishing itself as a leading vendor in the important US marketplace, and on the importance of Napatech’s 10GbE technology used in many segments for real-time data analysis. The flattering statement from the Jury highlighted that “Napatech is a Danish entity which uses more than half of its revenue stream on R&D and the company has already become market-leading, and furthermore has potential to become a major player.” 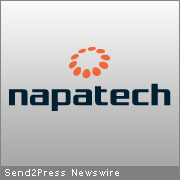 Napatech is proud and honored to win this award among 252 competing Growth Companies in Denmark.

The National Danish Ernst & Young “Entrepreneur Of The Year 2008” competition among Growth Companies had 1477 company entries of which 252 qualified in this year’s competition. This is a 46% rise in the number of competing companies, and a good indicator for the Danish overall business activity.

The Ernst & Young Entrepreneur Of The Year competition started in the USA in 1986, and now includes awards in 135 cities in 50 countries worldwide. The Danish national competition has taken place since 1997.

The Entrepreneur Of The Year competition is aimed at celebrating Entrepreneurs and creating a general public awareness of the benefits they provide to the world economy and our global communities. In the competition, the companies compete within a number of main and special categories across various business segments.

Napatech was founded in 2003 by Jens Christophersen and Thomas Jorgensen, on the idea of building advanced real-time data analysis adapters based on the most modern technology available. These adapters hold a generic feature set, which like an “engine” will fit a variety of different solutions in various market segments. Napatech markets these adapters to OEM customers worldwide with the main market in the USA and with Europe coming on very strongly, and the next market will be Asia.

Napatech has been able to create substantial interest from investors based on the increasing revenue stream; from 2006 to 2007 the revenue grew by a factor of four.

Napatech is a leading OEM supplier of multi-port 1GbE and multi-port 10GbE high-performance network adapters. The core idea is to off-load real-time/streaming protocols, payload analysis and control applications traditionally implemented in software or proprietary hardware. Napatech expects a huge growth in the demand for intelligent and programmable adapters as Ethernet speeds increase, since the current PC architecture limits the amount of processing that can be achieved. Napatech has sales, marketing and R&D offices in Mountain View, California, Andover, Massachusetts, and Copenhagen, Denmark.

Bunk 57 Ministries Receives a $40,126 grant to reshape the lives of Minority Young Men