SAN FRANCISCO, Calif. — Museum of Robots in Second Life will announce the winners of its first annual “Build-a-Robot” Competition at an event on July 19, 2008 at 9:30 a.m. PDT. A Linden dollars prize will be awarded to 10 winners and all entrants receive a merchandise prize. Winners will be selected by a panel of judges and by popular choice. Entry Classes include Standalone display, Wearable, and Homage to Classic Robots.

The three top-judged entries in each category will win an award, and a People’s Choice prize will be given. Winners in the Homage category receive the Fred Barton Award, named after the famous robot builder who is a recent Saturn Award recipient. 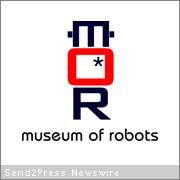 The competition’s goal is to explore what a robot is, how it can be expressed within the parameters of Second Life, and to encourage creativity and originality. With almost 50 entries received, creativity is indeed on display.

Says Museum of Robots co-founder Vicki Kung (Bibi Bayliss in Second Life), “The quality and variety of the work done by competition entrants is extraordinary. Each entry explores and interprets the theme ‘robot’ in a different way, and the range of creative vision, the skills in building and a sense of fun and humor is evident in each one. We are delighted and proud to be able to showcase the remarkable talents of these designers.”

Competition entries are currently on display at Museum of Robots (www.MuseumofRobots.com) and will remain on exhibit through August. The Museum is located at (http://slurl.com/secondlife/Kubrick/98/161/26).

A video introducing some of the entries can be seen at http://www.youtube.com/watch?v=EZHuA2tuO6g

About Museum of Robots
Museum of Robots is dedicated to the appreciation of robots. Its mission is to promote understanding of the place of robots in popular culture, art, and science and features exhibits, art, and special events. Current exhibits include: “The Art of Eric Joyner” featuring selected works from his upcoming book, “Robots and Donuts”; Celebrity Robots Hall of Fame, sponsored by Fred Barton Productions and featuring famous robots of cinema and television; Toy Robots, featuring toy robots from a private collection, and Bot Shots, featuring robot photography.

Announcing Seedling’s Fab Five Winners: Seedling to Honor Winners at 11th Annual April Gala in support of Children who have an Incarcerated Parent