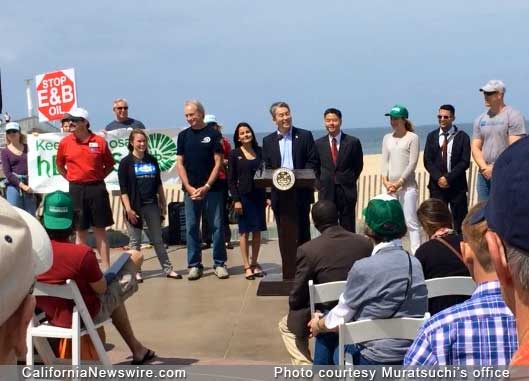 HERMOSA BEACH, Calif. /California Newswire/ — Calif. Assemblymember Muratsuchi (D—Torrance) affirmed his opposition to the oil drilling project proposal in Hermosa Beach and shared details of his Assembly Bill (AB) 2711 at today’s press conference. “I oppose the oil drilling project in Hermosa Beach because the thought of an environmental disaster with devastating impacts on our coastline is a serious concern for me as a surfer, an elected official representing thousands of businesses that rely on tourism dollars, and most importantly as a father who brings his family to these beaches,” said Assemblymember Muratsuchi.

“Ultimately, the decision is up to the voters, but I introduced AB 2711 because I want to make the right decision less costly to the city.”

E&B proposed a settlement payment to Macpherson for rights to the oil project and termination of the action in return for (1) the opportunity to pursue project negotiations with the city, and (2) full or partial repayment to E&B by the city for a portion of the settlement payment that E&B makes to Macpherson. Macpherson settled for 30 million dollars and Hermosa Beach agreed to allow the voters to decide whether they wanted to lift the ban on oil drilling. Hermosa Beach would pay back E&B $17.5 million if the ban is not lifted and the oil project is rejected.

AB 2711 would loan $17,500,000 from the state tideland oil revenues to the city of Hermosa Beach to pay back E&B. Hermosa Beach would be required to pay the loan back at a rate of $500,000 per year and all payments would be deposited into the State Coastal Conservancy Trust Fund to be used for its Climate Ready Program.

The bill will be heard in the Assembly Natural Resources Committee later this month.