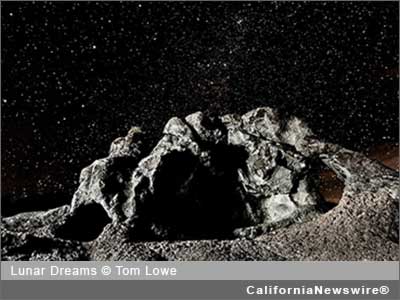 Says Slater, "In 'Mojave Moonlight,' Tom Lowe has used moon and starlight as the sole source of illumination. The resulting collection reflects a mood and aspect of the Mojave that even seasoned desert travelers rarely experience."

"Mojave Moonlight" opens at the Desert Light Gallery in the Kelso Visitor Center on March 7, 2014 and closes on June 14. Lowe presents 18 large-scale images that explore the Mojave landscape with compositions specific to the moon lit sky.

"Night photography in and of itself is fascinating, and challenging," says Lowe. "But this project was not about night photography per se, it was how the Mojave Desert feels, radiates, and portrays itself at night."

Tom Lowe lives in Los Angeles and is a successful TV commercial producer. His work has taken him to six continents and during his downtime he avoids the tourist havens. "I've endeavored to take the road less traveled, eat in cafes frequented only by locals, and walked the streets without a map," said Lowe. "When the opportunity to become an artist-in-residence for Mojave National Preserve arose, I found another opportunity for a road less traveled."

Lowe found that his years of film location scouting were invaluable for this project. He discovered his image locations by driving deep into the Mojave, parking his car at sunset, then hiking in to reach cactus, rocks and dune formations, seeking inspiration in the stillness.

"I grew up in the wide-open spaces of the American west where, during family camping trips, I fell in love with the night sky," he noted. "As the rest of the family retired to the warmth of the trailer my father towed behind our car, I'd take my sleeping bag and lay down next the glowing embers of the campfire and watch the stars. With this project, I rediscovered the light show in the Milky Way blanket – shooting stars mixed with the countless satellites that then introduce the moon as it moves on to its western horizon. Night in Mojave Preserve is an astronomical wonder."

The "Mojave Moonlight" exhibit presents the desert with a gleam that caresses the rocks, cactus, and wide-open landscapes in a soft glow that takes the edge off a rugged terrain. Combining the moon's soft glimmer with crisp starlight and long exposures lifts details from the dark that produce their own aesthetics. While the night imaginary echoes the distinct character of daylight, Tom Lowe's cinematic styling amply rewards viewers with a new desert narrative, and a new journey through the vast Mojave Preserve.

Tom will be available to discuss his work on March 8 from 10 a.m. to 2 p.m. Collectors who wish to own prints may obtain them at the Kelso Depot Visitor Center Book Store. Proceeds from print sales help support a variety of outreach programs at Mojave National Preserve.