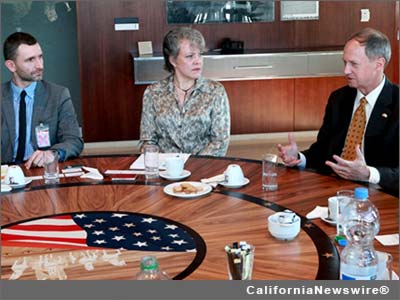 HOLLYWOOD, Calif. /California Newswire/ — The National Association of Record Industry Professionals (NARIP) led a delegation on a mission of commerce, culture and copyright advocacy from Hollywood to Berlin during September 2013 – with ongoing efforts – to stimulate entertainment economic activities in both countries. The mission resulted in music placements in American productions, including a German artist, and renewed interest in international creative collaborations.

NARIP brought two leading music supervisors, VH1's Paul Logan ("Black Ink Crew," "Couples Therapy") from Hollywood, and Michael Hill (Emmy(R)-winning "Nurse Jackie") from New York, to find music for their current projects, for events in Berlin, hosted by the Berlin Music Commission. Songs and recordings were presented by the German music industry to Logan and Hill for analysis and consideration.

NARIP's delegation met with American Ambassador to the Federal Republic of Germany John B. Emerson as well as Cultural, Economic and Commercial Affairs Officers at the American Embassy. Ambassador Emerson took great interest in NARIP's initiative to seek out German music for American film and television that benefit artists, songwriters and copyright owners, as well as world audiences and fans. Also discussed were efforts to address music piracy.

"We have been delighted to work with NARIP on its high-profile collaboration and trade opportunities between Hollywood and Berlin," said Emerson, "and share its advocacy for the rights of artists and creators, and its passion for music that elevates our culture and inspires the world."

Following NARIP's programs at Berlin Music Week, NARIP President Tess Taylor emphasized how important it is for the U.S. and Germany to strengthen and reinforce copyright protections for authors and owners. Erosion of copyright has adverse effects on U.S. innovation, jobs, the economy, our balance of trade with other nations, and cultural exports which reflect American ideals that lead the world toward democracy, freedom and a better future.

"I am thrilled by the success of NARIP's Music Supervisor Sessions at Berlin Music Week, especially by recent music placements from our sessions," says Taylor. "It's gratifying when our global organization can facilitate great music for the public and commercial success for creators and marketers of music, no matter where in the world they may be. NARIP has helped make the distance between Hollywood and Berlin that much shorter."