LOS ANGELES, Calif. /California Newswire/ — Reckon Memoir, a pop/rock band originally from Orange County, Calif., established in the year 2007, announced today the release of their first self entitled EP which features four songs from their repertoire. This four song preview to their upcoming album includes songs Domino Effect, Just Leave, Shattered, and Blindfolded; songs that – after being played in front of audiences around L.A. and Orange County – people are very exited about. 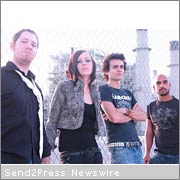 During the last year Lead Singer Sasha, Guitarist Enrique, and Drummer Chris, have been creating fresh new pop/rock songs in different studios and rehearsal rooms trying to write great songs that will hit radio airwaves in the near future. Blindfolded, a song written by singer Sasha and Grammy-award winning producer Harvey Mason Jr., is the first track of this EP; giving you an idea of what kind of content to expect. The remaining songs were written by the band.

“We have been writing together for more than a year now, and it has been a great experience,” says lead singer, Sasha. “I have learned so much from these guys and I think we have a great future ahead of us. We decided to record these 4 songs, from a repertoire of more than 15 tracks, to create a buzz between fans and friends while we continue to perfect those 15 songs; which we are planning to record and release in an album format pretty soon.”

The band played at the club Good Hurt in West Los Angeles, this past Friday, February 13th to give away copies of their EP to fans and friends and to continue with the promotion of the band and the growth of their fan base. They are going to be playing on Saturday, February 21st in Huntington Beach, at the Gallaghers Club and also several dates in March around Southern California.

This new EP is a “great outlook for the pop/rock scene.”