LOS ANGELES, Calif. /California Newswire/ — Amongst all of the glitz and glamor that is so prevalent in the modern cuisine industry, one factor consistently and undeniably proves itself: that unforgettable, exquisite flavor will always reign superior in the hearts of food lovers. Take into account the groundbreaking story of Korea Town’s/LA’s newest gem, H Cafe – part of the H Hospitality Group. 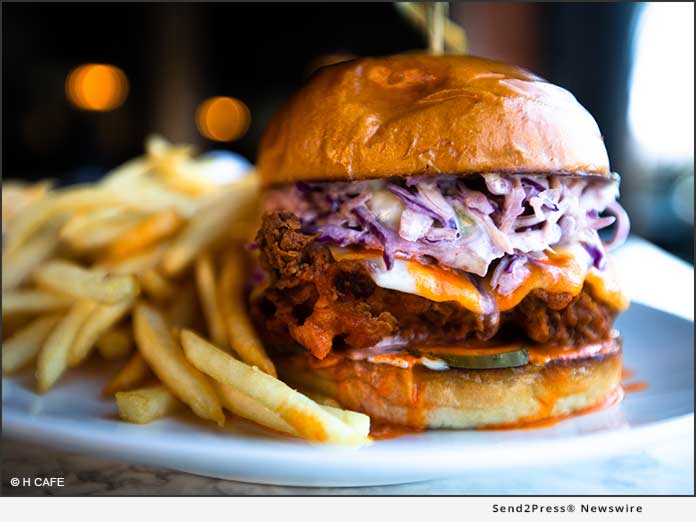 Located in the heart of Koreatown, it is simple to see why this family run restaurant has quickly become one of LA’s hottest spots.

In an attempt to expand its exposure, H Cafe entered a culinary competition at the Indigo Hotel. Coming into the competition, H Cafe was undoubtedly the least recognized restaurant, competing against award winning contenders including Broken Spanish and Salazar, both of which were recognized as bib gourmand restaurants by Michelin’s 2019 guide, Otium, Faith and Flower, Nankai Shochu, Patina, and most of the other heavy-hitters of the culinary Los Angeles food scene.

H Cafe’s team was expertly crafted. Its executive chef Michael Reed, was leading the team, accompanied by Sous Chef Nelson Correas and talented general manager Brian Quezada. The undeniable strength of the team became evident when Sous Chef Nelson, after a sleepless night of passionate cooking, came up with a buffalo chicken sandwich sauce that would change the fate of the restaurant. Nelson’s hot sauce went on to win over the hearts of his coworkers and eventually the palates of LA’s most critical diners.

As an unknown restaurant, the pressure of competing against the top chefs in the state was imminent – but no match for the drive and determination of this passionate team. Tensions were exacerbated when, due to H Cafe’s unrecognizable status, the competition holders forgot to provide the only tool they needed to fry the now “award-winning buffalo chicken sandwich” which was a fryer.

After the setback, the team powered through: they ran to Chef Michael Reed’s restaurant Poppy & Rose, picked up a 50 pound fryer, and raced back to the competition. Even though H Cafe’s booth started setting up while the competition had already begun, the team began frying what would be a total of 700 spicy chicken sandwiches for an especially critical audience at an unprecedented pace. The competition was taken by storm when, amongst bib gourmand awarded and other highly reputable restaurants, Chef Reed’s famous spicy chicken sandwich with Chef Nelson’s homemade Buffalo hot sauce took the top prize at the event.

Astounded competitors, despite being shocked at their defeat, were quick to grant their congratulations to the unprecedented victor. Despite being the smallest, youngest and least recognized restaurant by an overwhelming margin, H Cafe’s incredible team and unequivocal flavors captured the hearts and palettes of LA’s most critical diners.

And their journey didn’t stop there. On the weekends, you can clearly see the storm that H Cafe has caused; lines trail out the door, and happy customers can be seen sipping mimosa flights and snapping photos of their picture-perfect dishes.

Upon entering the H Cafe, the welcoming environment is felt instantly, accentuated by the prohibition era-like atmosphere. The modern decor and low-hanging lights provide a lively intimacy which can be felt (and heard) from far outside its doors. Tucked into a beautiful boutique hotel, H Cafe undoubtedly stands out as a gem amongst other prominent restaurants: fueled by passion, determination and most importantly, flavor, this restaurant is one for all food lovers to keep an eye out for.