HOLLYWOOD, Calif. /California Newswire/ — For a man who will be 70 next year, singer/songwriter extraordinaire Leon Ware is working up a storm! Still promoting his acclaimed Stax Records debut, Moon Ride, featuring the divine new single “Hold Tonight,” Ware is also taking a moment to reflect long and deep on his hallowed history with legendary Motown Records – now celebrating its 50th Anniversary. When Leon Ware performs in Los Angeles, the stars come out. And that’s exactly what is expected on Thursday April 16 when he once again takes the stage of Hollywood’s premier jazz club, Catalina Bar & Grill for shows at 8 p.m. and 10 p.m. – intimate performances of timeless classics and sparkling new compositions. 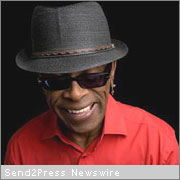 He will be performing with a stellar band consisting of Wayne Linsey on keyboards, Alex Al on bass, Donnell Spencer on drums, Dave Foreman on guitar, the lovely Estaire Godinez on percussion and the vivacious special guest vocalist Nikki Grier.

Motown will be a special emphasis for this show where Ware will revisit songs he composed for some of the company’s icons. There’s Michael Jackson who as a child recorded Leon’s “I Wanna Be Where You Are.” And then there is Marvin Gaye, who would have been 70 this year. To honor his memory, Ware will include selections from the sensual boudoir masterwork he composed for Mr. Gaye, the I Want You album, including the smash hit “After the Dance.”

In March, Leon Ware performed for Berry Gordy during a gala Motown celebration held at the annual Urban Network Summit in Industry Hills, California. He also participated in a revealing interview for a very special podcast – make that a “Mocast” – all about Marvin Gaye and Motown that will be made available by iTunes on April 14.

Leon Ware is a world renowned songwriter and architect of sensual soul. He has collaborated with many fine artists since the 60s, including the Isley Brothers, Bobby Womack, Minnie Riperton, Quincy Jones, Teena Marie, Maxwell, Loose Ends, Norman Connors, Jazzanova, Amp Fiddler and Omar. An anthology of his work with others was released on the U.K.’s Expansion label titled Leon Ware and Friends.

As an artist in his own right, Mr. Ware has also recorded 12 solo albums, his latest being “Moon Ride” on Stax, as part of the classic soul label’s recent reinstatement as part of Concord Records.