It was a good choice. One year later, Java Juice (R) can be purchased through such industry giants as www.REI.com, Campmoor, Peregrine Outfitters and Adventure 16 to name a few! Websites that cater to extreme outdoor adventurers such as www.Backpackinglight.com and www.Powderfin.com made Java Juice(R) a MUST HAVE travel product. Suppliers to military personnel such as Brigade Quartermaster offer Java Juice(R) to soldiers as far away as Afghanistan who send a steady flow of fan letters thanking Java Juice(R) for the luxury of a great cup of coffee in the field. (Visit company website to read testimonial letters.) 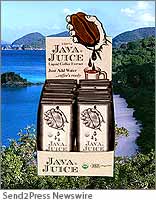 At the 2007 OR Winter Market, Karno will again be demonstrating the virtues of Java Juice(R), including superior taste, ease of use, and sustainability (Java Juice(R) is made from fairly traded, and shade grown coffee beans). Each packet has a PSI rating of 190 pounds, rendering them virtually un-crushable in travel bags. Karno, an ex linebacker always draws a crowd at the OR booth when he crushes the packets in his fist to show their durability. Jason Magnus, a typical Java Juicer and Primal Quest finalist said: “I carry packets of Java Juice and find some hot water (always free). Instant coffeehouse quality, coffeehouse caffeine, at a climbing bum’s price!”

Java Juice’s flavor is vastly superior compared with traditional coffee extracts. This is because Karno defied the usual practice of using commercial grade coffee beans to make his extract. Instead, he uses the same ultra high-grade organic beans he roasts for his coffeehouse customers. The result is smooth, full-flavored coffee taste in a product with go-anywhere convenience. To make Java Juice(R), fresh roasted beans are ground and brewed through a proprietary process using moderate temperatures. The extract is then packaged in single-use packets and flushed with nitrogen to make it oxygen-free and shelf-stable. No preservatives or additives are introduced during any part of the process. The result is an “on-demand” cup of organic coffee that hikers can carry in a pocket until ready to use.

“Until Java Juice, portable organic extract did not exist,” explains Karno, whose commitment to progressive coffee standards includes sourcing only fairly traded, shade-grown, organic coffee beans. “With Java Juice, each packet you carry with you contains a cup of great tasting, organic and socially responsible coffee. What more can you ask for?”