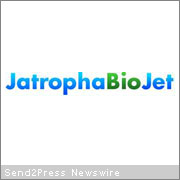 In the announcement, JBJ Chairman Charles V. Fishel, said “JatrophaBioJet is being formed with the objective of being a major international player in the use of Jatropha Oil as a replacement for aviation jet fuel. The world’s annual consumption of jet fuel (excluding military) is about 2 Billion Barrels. The International Air Transport Association has stated it wants 10-percent of jet fuel to come from biofuels by 2017. Today Jatropha Oil is the most desirable biofuel additive to jet fuel — a potential market of at least 200 million barrels of JatrophaBioJet fuel per year.”

Mr. Hawkins, CEO of JatrophaBioJet, stated “JatrophaBioJet will operate at the intersection of Jatropha biofuels, aerospace, and carbon offsets. Renewable sourcing combined with reduction in carbon emissions is the primary object in aircraft burning a petroleum replacement. Oil costs fluctuate and when they are high, this alternative is disruptively cheaper. Today, with very low oil prices, they are probably equivalent. However, pricewise, if you think oil will be higher in the future, you need to get ready to fly Jatropha.”

South Pole Carbon, based in Zurich, is a worldwide carbon credit developer with offices on every continent and approximately 150 projects currently underway.

Mitch Hawkins & Co. is a leader in environmental commodity development with current involvement in approximately $1.5 Billion of projects.