SAN FRANCISCO, Calif. — IO2 Technology announced today the release of its newest mid-air display, the Heliodisplay M3, serving new markets world-wide. “The M3 is another step forward in applications that benefit from free-space displays and we are enthusiastic about its capabilities expanding into a wider application base,” commented Chad Dyner, the developer of some of the technology used in the Heliodisplay.

These improvements allow the display to begin to offer advantages in markets such as teleconferencing, board room displays, and as an access point for gathering information in hotel and corporate lobbies. The Heliodisplay M3 is available directly from IO2 for $18,400 USD. IO2 also offers the Heliodisplay M3i, which in addition to all the features of the M3, serves as a computer input device for cursor control in a desktop environment, for a price of $19,400 USD. 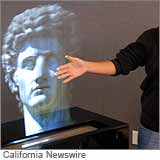 Expected customers of the Heliodisplay M3 include television production studios, teleconferencing board rooms, A/V integrators, advertisers, retail stores, automotive showrooms, museums, and even some individuals. “With these improvements, it is now easier to operate and maintain, and this helps this system reach farther into the mainstream” said Jay Fields, operations manager at IO2 Technology.

This has been emphasized by Lak Taecha, Managing Director of Imagine Technology: “Our corporate customers are thrilled with the M3. It’s the hottest new thing.”

For more information about the Heliodisplay M3, please visit the company’s website at www.io2technology.com