LOS ANGELES, Calif. — Inspired by America’s rich history of the coffeehouse as a hotbed of revolution and political discourse, groundwork coffee company is offering a free cup of American joe to voters in this year’s presidential election. Those who vote can redeem their ballot stub at any one of groundwork coffee company’s six Los Angeles cafe locations, on November 4th or 5th, for a free 12-ounce cup of fresh brewed coffee. Coffee gained popularity in America when tea-drinking revolutionists refused to pay the exorbitant tea tax levied by England, and turned to coffee and the coffeehouse. 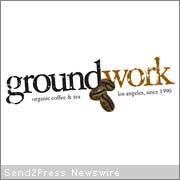 A good coffeehouse fosters a sense of community, and the exchange of ideas.

“I was getting really tired of people complaining about this country especially after I learned they didn’t vote! Hopefully this promotion will fuel conversation as well as engage more people in our democratic process,” said Richard Karno, owner of groundwork.

And for those who don’t drink drip coffee, the promotion allows customers to take a greenback off the price of any freshly prepared, groundwork coffee or tea beverage. When questioned about the inconsistency of including tea in the promotion, Karno is quick to reply, “We’re non-partisan.”

groundwork coffee company is one of the very first organic roasters in Southern California. Richard Karno founded the roastery in 1990, as an addition to his bookstore, which doubled as a cafe. groundwork offers organic, fairly traded, and other socially and environmentally sustainable coffees; all of which are kosher.

More information, as well as coffeehouse locations and hours, can be found on http://www.groundworkcoffee.com.

Data from 1,229 Tastings Reveals Ethiopia as World’s No.1 Coffee Country