FRESNO, Calif. /California Newswire/ — Today at Fresno’s Jefferson Elementary School, Governor Arnold Schwarzenegger highlighted the need for legislative action to ensure California is eligible to apply and compete for the largest pool of discretionary funding for education reform in U.S. history – $4.35 billion in Race to the Top dollars available through the American Recovery and Reinvestment Act (Recovery Act). On July 24, 2009, President Obama and U.S. Secretary of Education Arne Duncan outlined federal eligibility and competitiveness requirements for states to compete for this funding. With current law, California is ineligible to apply. Last week, Gov. Schwarzenegger called a special session of the legislature and announced a legislative package that will ensure California meets Race to the Top eligibility and competitiveness requirements. 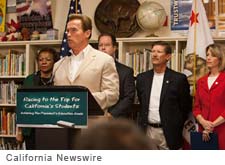 “I called a special session not only to ensure California is eligible and highly competitive for billions in Recovery funding for education – but because I believe the reforms outlined by President Obama and included in my legislative package will help provide a better education for California’s children,” said Governor Schwarzenegger.

For many years Fresno’s Jefferson Elementary School failed to meet state and federal student performance standards. Just last year, only 33 percent of students were proficient in math. This year, however, leadership from the superintendent, school board, mayor and the local community have come together and helped begin to turn the school around. For example, the school recently entered into a partnership with another school district to improve math instruction – and this year, 51 percent of students scored proficient in math. Race to the Top funds would build on the good work underway at Jefferson Elementary School and at schools like it throughout California.

“We must do everything in our power to ensure California is eligible and highly competitive for Race to the Top funding so California schools like Jefferson Elementary can access the benefits to help continue to improve their schools,” the Governor added.

Reforms to ensure California is eligible to apply and be highly competitive for Race to the Top funding include:

o Give parents more freedom to choose the school that best serves their children by both authorizing open enrollment for students in the lowest-performing schools so they can attend any school in the state – and removing the cap on “districts of choice” so any student in the state can attend school in a participating district.

o Focus efforts on the five percent of schools that consistently underperform, helping ensure all California students can reach the state’s academic standards.

o Measure student progress to help identify what works in the classroom. Every child is different and looking at both growth measures and overall achievement scores provides a better picture of a student progress over time.

Improving Accountability for Schools. Modifying how the state uses data to measure performance will help more accurately track the progress of students, teachers and schools on an annual basis – so that California can make continuous improvement in our education system from year to year.

Under Governor Schwarzenegger’s leadership, California was the first state in the nation to be federally approved for State Fiscal Stabilization Fund dollars – education funding also available through the Recovery Act. Over $2.5 billion of this funding has been distributed to California schools to date with hundreds of millions of dollars expected in the fall.

President Barack Obama’s Recovery and Reinvestment Act consists of over 300 funding streams originating from various federal government agencies and departments. Less than 50 percent of Recovery Act funding is estimated to flow through state government entities, with the rest distributed by the federal government directly to local governments, non-profits, businesses and other entities.

Governor Schwarzenegger created the California Recovery Task Force to track Recovery Act funding coming to entities in California; work with President Barack Obama’s administration; ensure funding funneled through state government is spent efficiently and effectively; help cities, counties, non-profits, and others tap into available funding; and maintain a Web site that is frequently and thoroughly updated for Californians to be able to track the stimulus dollars. The Task Force can be reached through its Web site, www.recovery.ca.gov, or by telephone at (916) 322-4688.