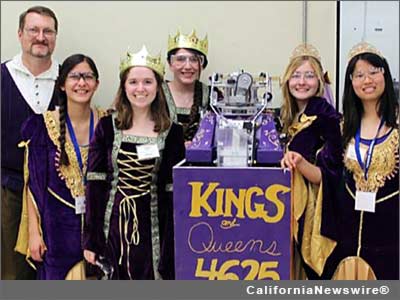 MONROVIA, Calif. /California Newswire/ — Five young women from Monrovia High School and their rhinestone-encrusted robot won the top Inspire Award at the Los Angeles FTC (FIRST Tech Challenge) Regional Championship Tournament held at Monrovia this past Saturday, the Monrovia High School Robotics Program announced today. Along with six other teams from cities ranging from Santa Barbara to San Diego, they advance to compete with top teams from eleven western states, Alaska and Hawaii in McClellan, Calif., near Sacramento on March 20-22, 2014 at the West Super-Regional FTC Championship.

These five junior class women – the "Kings and Queens" team – designed and built their own 18 by 18 inch robot from Tetrix parts, plexiglass, and machined aluminum to compete with alliances of robots on a 12 by 12 foot field. They stand out not just for their driving, design prowess, and their robot's ability to raise a flag and pull itself up on a bar. Heads turn as they drive their purple robot "Your Highness" while wearing their signature costumes of purple-velvet-and gold-embroidered renaissance dresses. They also spread the word of robotics design as they share their robot adventures with elementary and middle-school students around Monrovia.

Engineer and computer programming judges from major regional companies chose the team from among a field of the top 48 FTC robotics teams from throughout Southern California as the "role-model" team for their on-field success, teamwork, inspiration to others, representation of the First Robotics program to their school and community, and embodiment of "Gracious Professionalism," the core value of the FIRST program.

This win is the first Regional champion from Monrovia High School in its four-year-old FTC robotics program, supported by company sponsors and members of the community and led by physics teacher Tom Dobson. Monrovia High School advanced four teams to the Los Angeles Regional Championship, which drew winners from eight qualifier competitions from Los Angeles out to the High Desert. This high school FTC after-school program is one of many opportunities supporting STEM education (science, technology, engineering, and math) in conjunction with Monrovia's Math and Science Academy. A second of Monrovia High's four FTC Robotics teams, "Team R.E.D.," won an alternate spot for the Super-Regional tournament.

Winning teams in the West Super-Regional Competition will advance to the international championships in St. Louis, Mo. on April 23-26, 2014. The Monrovia High School FTC robotics program welcomes tax-deductible donations and company sponsorships to help cover the cost of traveling to Sacramento and hopefully on to St. Louis.

Accomplished inventor Dean Kamen founded FIRST(R) (For Inspiration and Recognition of Science and Technology) in 1989 to inspire an appreciation of science and technology in young people. Based in Manchester, N.H., FIRST designs accessible, innovative programs to build self-confidence, knowledge, and life skills while motivating young people to pursue opportunities in science, technology, and engineering. With support from over 200 of the Fortune 500 companies and more than $16 million in college scholarships, the not-for-profit organization hosts the FIRST(R) Robotics Competition (FRC(R)) for students in Grades 9-12; FIRST(R) Tech Challenge (FTC(R) ) for Grades 7-12; FIRST(R) LEGO(R) League (FLL(R)) for Grades 4-8; and Junior FIRST(R) LEGO(R) League (Jr.FLL(R)) for Grades K-3. Gracious Professionalism(R) is a way of doing things that encourages high-quality work, emphasizes the value of others, and respects individuals and the community.

In the FTC program, teams of middle and high school age teens design and build robots to address game challenges announced each September. Each robot must be built using only specified parts and materials, and the entire robot must occupy a space no larger than 18x18x18-inches at the start of each match. In this year's game, "Block Party," robots pick two-inch yellow plastic cubes from the floor and deposit them into elevated goals on a balance beam, raise a flag, and grab a bar suspended three-feet high and lift itself completely off the surface. Robots compete in five 2-1/2 minute matches over the course of four hours that combine a 30-second pre-programmed period using sensors and software written by the teams to drop blocks into goals marked with infrared beacons and navigate onto a wooden ramp, and a two minute teen-driven period using game controllers. Teams compete in pairs for the highest score, with the pairings randomly assigned, and a team's partner in one match can be their opponent in another.

More than 140 teams compete in the Los Angeles FTC Region from schools, community groups, and other organizations. Teams sign up each September and compete November through February in the region.

To learn more about the FIRST Robotics organization:
http://www.usfirst.org/ .

* Caption: The Kings And Queens team members and coach.

PR: HousingWire Honors DocMagic with Tech 100 Mortgage Award for the Eighth Year in a Row