FILM REVIEW: Billed as a mix between “Raiders of the Lost Ark,” “The Mummy,” and “Hero,” the new Jackie Chan movie, “The Myth” isn’t quite any of those, but is unique in its own indelible “Chanesque” style. “The Myth,” screened for industry and media on June 26th at the Arclight Cinema in preparation for a fall 2007 release is actually an English dubbed version of a Chinese release from 2005.

Using Chan’s own voice, and various other rather cartoon character like voiceovers, this movie hopes to make a shot at a North American box office.

Chan plays two parts in this movie, a modern day archeologist, and a two thousand year old Qin Dynasty warrior, and spends the movie juxtaposing — rather awkwardly at times — between the two. The modern day sections are much more interesting and deserving of screen time than the rather confusing under-produced past sections, but they do serve to move along the plot of Chan’s character, given the name (what else), “Jack.” 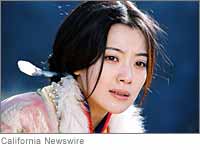 Finding modern connections to his past life “dreams” through his fascination and love for the babealicious “Okk Soo” played by Korean megastar Kim Hee-Sun, Jack is thrown from past to present through his archeologist benefactor’s search for the mysterious key to anti-gravity.

In search of this anti-gravity mystery the protagonists Jack, and his dope pal “William,” played by Tony Leung Ka-Fai, search through India in a sort of Asian Indiana Jones ripoff amidst rumors of a yogi who can make things float. There they are befriended by another voluptuous knockout yoga practitioner, the beautiful “Samantha,” Bollywood actress Mallika Sherawat, who helps send them in the right direction while displaying her own martial arts prowess. 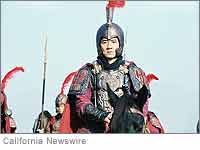 Finding out that the anti-gravity is actually caused by some mysterious alien meteorite, they ultimately travel into a treasure laden tomb and find a convergence of Jack’s past dreams and the present in a “Crouching Tiger, Hidden Dragon” style flying world which conveniently happens to house Jack’s dream lover, “Okk Soo” (no complaint here. for any excuse for more screen time from this knockout is warranted).

This all concludes in a battle between Jack and his greedy benefactor, “Mr. Ku,” played by actor Sun Zhou; who just happens to follow him all the way to the tomb, and who wants to bring back all the treasures for himself.

If this all sounds confusing, it is, but despite the plot holes, uneven transitions, over dramatic but compelling score, and really corny English dubbing, the movie entertains in that ever affable Jackie Chan way. Jackie Chan, like other understated action stars including Governor Arnold, or Stephen Segal, can succeed in entertaining despite being in an uneven film. 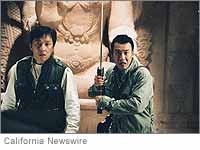 The action scenes in this outing are spectacular, especially one incredible “sticky glue” scene which makes one’s jaw drop to think that Chan is in his mid fifties. Multitalented Chan even sings a song in the soundtrack, “Endless Love,” which was nominated for a Hong Kong Film Award.

This is not your standard Jackie Chan fare, and even if it doesn’t work at times, you have to admit that director Stanley Tong, and Chan, have succeeded in their admitted vision to do something different. The movie as a whole is not perfect, but there are moments of surprisingly unique greatness that make “The Myth” a captivating action romp which always leaves the audience wondering “what’s next?”