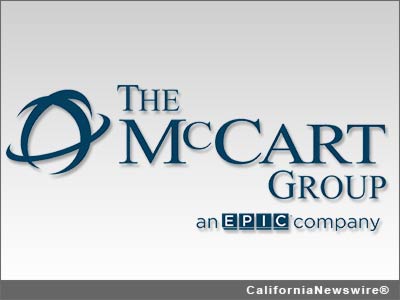 The McCart Group provides risk management, property & casualty, employee benefits and personal risk management products to local, regional and global companies in a wide range of industries. Based in metropolitan Atlanta, The McCart Group has been recognized as one of the Southeast's top insurance brokers & agents, as well as both a Best Place to Work and Top Workplace in Atlanta.

As part of EPIC, the firm will now operate as The McCart Group – an EPIC Company. The addition of The McCart Group will add approximately $20 million in revenue to EPIC in 2014, along with more than 100 top professionals and a strong regional presence in the Southeast.

"The addition of Jeff McCart, the McCart Group's leadership team and the many capable McCart Group employees is an exciting way to establish EPIC's first large regional platform outside of California," said EPIC co-founder and CEO John Hahn. "We have great respect for Jeff and his team, who have built their business on the highest standards of personal integrity, innovation and service excellence. The McCart Group is a solid base and exceptional partner for EPIC in the Southeast as we begin executing our aggressive plans for national expansion."

"The McCart Group and EPIC share many beliefs, values and business practices in common and all of us are mutually dedicated to perpetuating a culture that rewards innovation, teamwork and absolute client satisfaction," says McCart Group President Jeff McCart. "As part of EPIC, we will have access to the experienced professionals, broad resources, additional capital and extensive insurance company relationships of one of the nation's top 40 insurance brokers – all to supplement our own outstanding people and resources for the benefit of our clients. We believe in EPIC's vision to expand scale while maintaining a client and people focused culture and strongly support the sell-in versus sell-out approach in achieving that vision. This is a very exciting time to join a unique, successful company like EPIC."

Derek Thomas, EPIC chief strategy officer said, "With the investment and strategic support of our private equity partners The Carlyle Group and Stone Point Capital, we expect to build something truly extraordinary in the insurance brokerage business over the next five years. We are excited to have partners like Jeff McCart and the McCart Group leadership team that are committed to the EPIC vision and we invite other top firms like The McCart Group to join with us on this EPIC journey."

EPIC is a unique and innovative retail property & casualty and employee benefits insurance brokerage and consulting firm. EPIC has created a values-based, client-focused culture that attracts and retains top talent, fosters employee satisfaction and loyalty and sustains a high level of customer service excellence. EPIC team members have consistently recognized their company as a "Best Place to Work" in multiple regions across California and as a "Best Place to Work in the Insurance Industry" nationally.

With more than $100 million in revenues, EPIC ranks among the top 40 retail insurance brokers in the United States. Backed by the Carlyle Group and Stone Point Capital, the company's strategic plan calls for a dramatic increase in revenue ($250 million by 2018) and further expansion across the country. For additional information, please visit http://www.edgewoodins.com/ .

About The McCart Group – an EPIC Company:

One of Atlanta's leading independent insurance brokers, The McCart Group was established in 1971 and is comprised of a Risk Management and Property & Casualty Insurance practice and an Employer Services & Group Benefits practice. The McCart Group employs over 100 professionals in their Duluth, Ga. office.

The McCart Group's capabilities encompass the entire spectrum of risk management – property & casualty brokerage, benefits consulting and brokerage services, human resources services, safety & risk control services – all areas that if not managed properly can create significant risk for an organization. Its client base is international, national, and local.