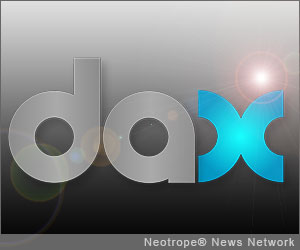 The DAX|MOBILE application, available on iTunes, incorporates all of the DAX 4.0 features for on-the-go iPad users.

The new 4.0 upgrade includes all of the DAX basics such as the tools to manage, ingest and review digital assets and metadata from pre-production, dailies from production, cuts and sequences from editorial and post, and throughout the content creation lifecycle including distribution of video, images, and documents

Patrick Macdonald-King, CEO/President of DAX, said, "As the leading digital workflow platform in the entertainment industry, we are responding to input from our many users. This application release simplifies DAX navigation, increases performance and overall makes our product better. It's part of our ongoing commitment to content creators to make their media universe more accessible, creative, and collaborative."

Macdonald-King will be a keynote speaker at the Cloud Computing Conference, a feature of this year's NAB in Las Vegas. Macdonald-King will kick off the Monday, April 8, 1 p.m. session titled "Cloud Solutions for Content Creation," sponsored by DAX. DAX will also have a NAB suite at the Renaissance hotel adjacent to the South Hall, demonstrating DAX 4.0, releasing April 2013.

Television shows currently using the DAX platform include: "Homeland," "NCIS," "New Girl," "The Walking Dead," "CSI," "American's Next Top Model," "Bones," "The Mentalist," "Two and a Half Men," "Glee," "How I Met Your Mother," "Dexter" and "Mad Men;" and all of the pilots for CBS Television Studios, 20th Century Fox, and Warner Bros. Television Studios. Recent feature film productions include "Hunger Games," "Twilight," "42," "Dolphin Tale," "Resident Evil 5," "Beautiful Creatures," and "Mortal Instruments," as well as many other tent pole and independent feature films.

Formerly Sample Digital, in 2012 the company's product became the company's brand, and DAX ( www.daxcloud.com @daxplatform ) continues to lead the industry at center of the media universe. DAX is the leading provider of targeted workflow and media asset management applications and services to companies that produce, distribute and license audio-visual content.

The DAX platform is a highly-secure innovative web-based community used by most major studios and television networks for collaboration and distribution management of content during the production process, for marketing and distribution of final product, and for easily accessible library management for re-use of production elements, including video, audio, photos and documents.

The company is based in Culver City, Los Angeles, close to the major Hollywood studios and networks it services.