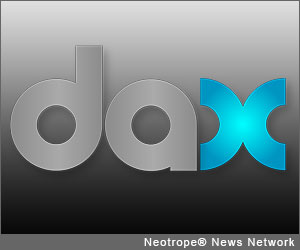 CULVER CITY, Calif. /California Newswire/ — DAX LLC and its parent company, Sample Digital Holdings LLC, announce today that the United States Patent and Trademark Office has issued a patent for "a system and method for media content collaboration throughout the media production process," broadening its previous patent No. 7,660,416 granted in 2010.

The new patent, issued as U.S. Patent No. 8,218,764, covers the DAX media workflow platform that offers a suite of applications, including Digital Dailies(R) and iDailies(R), which optimize the business and creative process in content production and distribution management.

"This patent marks the leadership role that DAX holds within the industry for technology relating to the collaboration of media content throughout the entire content creation production process," stated Patrick Macdonald King, CEO of DAX, and Chairman of Sample Digital Holdings.

"For nearly a decade, our targeted research, creative vision and real world application of DAX technology has delivered the tools needed by studios, broadcast and cable companies to easily and effectively collaborate on all aspects workflow and production of media content. Our continuing efforts to develop and advance our technology for the future give us a competitive edge in this field."

DAX is a highly secure online environment where users can share ideas, information and content created throughout the production or campaign lifecycle, or as required for trafficking and distribution of final product. DAX incorporates workflow, collaboration, transcoding, distribution and security services into one robust, extendible solution available via desktop, set top box and mobile applications such as DAX|Mobile.

DAX (www.daxcloud.com) is the leading provider of targeted workflow and media asset management applications and services to companies that produce, distribute and license audio-visual content. The DAX platform is a highly-secure innovative web-based community used by most major studios and television networks for collaboration and distribution management of content during the production process, for marketing and distribution of final product, and for easily accessible library management for re-use of production elements, including video, audio, photos and documents.

The company is based in Culver City, Los Angeles, close to the major Hollywood studios and networks it services. Formerly Sample Digital, in 2012 the company's product became the company's brand, and DAX continues to lead the industry at center of the media universe.