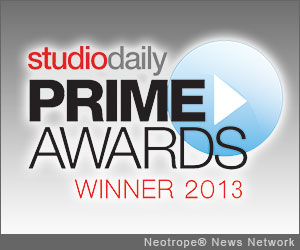 CULVER CITY. Calif. /California Newswire/ — DAX, LLC, the Los Angeles-based provider of cloud production workflow and media asset management applications and services to companies that produce, distribute and license audio-visual content, has been awarded the StudioDaily Prime Award for "Ease of Use."

The annual industry awards honor the top tier of new software and hardware being used in production and post today.

"We are happy to be recognized by the prestigious StudioDaily Prime Awards this year," said DAX CEO/President Patrick Macdonald-King, "building on the momentum we started with the launch of our new 4.0 cloud platform at NAB and the opening of Canadian operations in Toronto. The award validates the work our team has done to become the leading production workflow platform serving our industry, and best of all we won an award for how easy it is to use the application – mission accomplished."

The event, held in conjunction with NAB at the Las Vegas Convention Center on April 9, honors the top tier of new software and hardware being used in production and post today. The distinguished circle of nominees, holding the key to innovation in leading-edge technology, can be found at the link below:

Television shows currently using the DAX platform include: Homeland, NCIS, New Girl, The Walking Dead, CSI, American's Next Top Model, Bones, The Mentalist, Two and a Half Men, Glee, How I Met Your Mother, Dexter and Mad Men, and all of the pilots for CBS Television Studios, 20th Century Fox, and Warner Bros. Television Studios. Recent feature film productions include Hunger Games, Twilight, 42, Dolphin Tale, Resident Evil 5, Beautiful Creatures, and Mortal Instruments, as well as many other tent pole and independent feature films

Formerly Sample Digital, in 2012 the company's product became the company's brand, and DAX ( www.daxcloud.com @daxplatform ) continues to lead the industry at center of the media universe. DAX is the leading provider of targeted production workflow and media asset management applications and services to companies that produce, distribute and license audio-visual content. The DAX platform is a highly-secure innovative web-based community used by most major studios and television networks for collaboration and distribution management of content during the production process, for marketing and distribution of final product, and for easily accessible library management for re-use of production elements, including video, audio, photos and documents.