Instead of cleaning up the White House, the original Trump toilet brush is taking care of buyers’ business in the bathroom

ENCINITAS, Calif. /California Newswire/ — Michelle Rubel, owner of SpacedOutDesigns and the inventor and creator of Commander in Crap(TM), is helping make toilets great again(TM) with her viral invention, a Donald Trump toilet brush that American and international customers are gladly grabbing to clean up their crap. 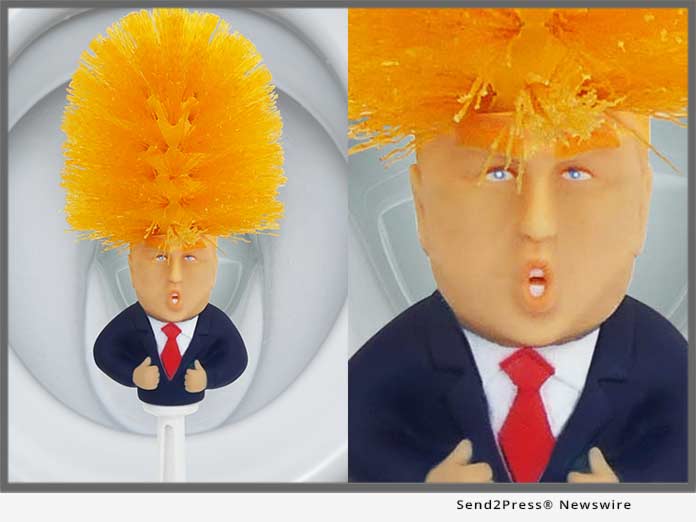 Within a few months of the presidential product being featured on a famous New Zealand media site (not fake news), Rubel surprisingly saw Commander in Crap(TM) sales skyrocket to more than 10,000 units.

The trending toilet brush features Trump with his notorious orange-yellow hair and fitted in a blue suit, white shirt, and red tie. While some people are using the original patent-pending POTUS toilet brush to polish their own porcelain thrones, others are finding that their unique purchase is a huge hit for birthday, holiday, and gag gifts. Ironically, the Commander in Crap(TM) creator’s ingenious idea didn’t start with the Donald but with another Republican president.

“Humor has always been a big part of my life,” says Rubel. “I’m not an activist; I consider myself to be an idea person.”

Rubel, who holds a master’s degree in sculpture and theater tech/set design from the University of Missoula and moved from Minnesota to San Diego in 2003, originally envisioned a Bush Brush. While that concept was never conceived during the time of the 43rd presidential term, Rubel knew once Trump was elected, she had to morph her Bush Brush brainwork into a modified Trump version because of its tremendous winning potential.

When the fine arts aficionado produced the first prototype it was no surprise that the hardest part was producing the orange hair-like bristles, but she found the perfect paint during a trip to the local big box store. As a result of Rubel’s exuberance and creativity, she went from a prototype to handcrafting a functional product in just two weeks. With only a few units in stock, she listed the original brushes on Etsy, an online platform where artists showcase their handmade creations.

At $23.50 plus shipping and handling costs, the presidential toilet brush will bring a deep clean as well as a smile to the face of the user.

ABOUT COMMANDER IN CRAP:

The Commander in Crap(TM) Trump Toilet Brush is making toilets great again. The handcrafted product by creator and inventor Michelle Rubel features Donald Trump with his blonde hair, blue suit, and red tie. More than 10,000 units have been sold worldwide.

Commander In Crap Video Short
Watch this video on YouTube.