LOS ANGELES, Calif. /California Newswire/ — “Get Laughs or Cry Trying” is a fresh digital sketch comedy series, releasing original sketches on 4K HD on YouTube every Sunday through January 16, 2022, followed by HD release the next day on Instagram. The second episode, “PostMurder” premiered July 25, 2021, and is an Official Selection of The 4th Annual Battle of the Sketches. 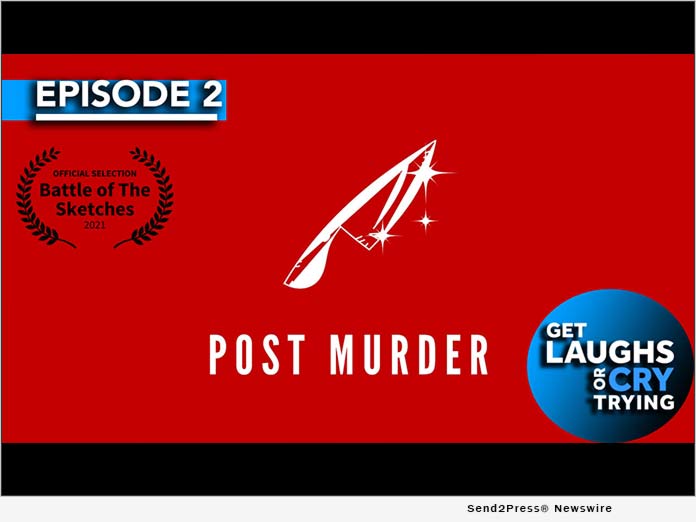 “PostMurder” is a parody of popular app-based delivery services, with a dark twist. “As someone who’s spent a lot on app-based food delivery — did I say that right? — anyway, I’m happy it’s paid off. I mean it hasn’t paid off financially, of course, but it’s great just to be a contender for an award,” Ken Rudnick shared. The writer, director, creator and sometimes co-star just wants to make people laugh.

“I missed the sketches we did back in college, when I was part of LCC, Lapu the Coyote that Cares Theatre Company.” The UCLA sketch troupe, founded in 1995 by Randall Park, Dave Lee and Derek Mateo was a place for students to put on original plays and sketch shows where underrepresented artists would be able to play starring roles. “As someone from the sketch comedy community I never expected to win anything, whether it be a contest or my parents’ approval. And to be fair, we may not win,” Ken said. “But as someone who’s never been selected to play a sport, being an official selection still feels like a W.” The sketch will go head-to-head with comedy from around the world on October 16, 2021 at the Alamo Drafthouse Mueller in Austin, Texas, vying for recognition as Battle of the Sketches’ Live Round Champion.

“My favorite part was creating and throwing the fake blood,” co-star Myra Vitela said when describing the process of making the sketch, “It was a mix of ketchup, hot sauce, and some other stuff. It smelled so bad and it got everywhere, but the end result was hilarious.” PostMurder was edited by Judith Schomp. When informed of the official selection status, Gregory Rosenberg who co-stars with Rudnick and Vitela revealed, “I didn’t plan on being shirtless so early in my sketch career, but it wasn’t gratuitous or anything.”

Ken enlisted a group of young Hollywood talent, including co-producer Erin Walsh, Cameron “Camera” Coulter, and composer Stefan Ecklund, and asked them to make sketches on a shoe-string budget during COVID.

“We’re looking forward to being able to do live screenings and shows when COVID is over,” Ken said. “But even while people are stuck at home, we’re going to make them laugh, or cry trying.”

About “Get Laughs or Cry Trying with Ken Rudnick”

“Get Laughs or Cry Trying with Ken Rudnick” is a digital sketch comedy series available on YouTube and Instagram.