“Leader Alert gives us the ability to simultaneously alert key personnel at the airport – as many or as few as we need – with the vital information that they need to handle any kind of crisis, from an aircraft incident to a security threat,” said Morgan. “We will be able to alert using any kind of messaging system: landlines or cell phones, texting, even instant messaging, which will give our people a jump on the situation.” 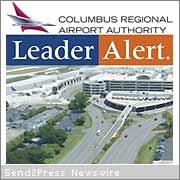 Using a technology that Leader has patented, Leader Alert can be deployed by a single individual to send a recorded message to hundreds of people simultaneously, using all current forms of messaging technology.

Leader Chairman Mike McKibben sees the use of Leader Alert at airports as a natural choice, given that its current users are schools and colleges, harbors and police forces, and state governments and agencies such as the Ohio Emergency Management Agency.

Before Hurricane Katrina struck, Pass Christian Harbor successfully used Leader Alert to alert people to get their vessels to safety, while another Leader product, Leader Phone(R), was quickly deployed by the Louisiana state government to coordinate relief efforts following the crippling of the state’s systems by the storm. Already this year, the Parma School system has reassured worried parents via Leader Alert after an armed assailant was detained as she tried to enter the school.

According to McKibben, “These kinds of situations have shown us how vital it is for first responders to get the right information quickly in order to handle situations, keep people out of harm’s way, and save lives.”

Leader Technologies Incorporated is located in Westerville, Ohio and offers other communications and alerting products and may be reached at John Needham, (614) 890-l986 or online at http://www.leader.com.