The phenomena followed an international prayer on December 10, orchestrated by NVF, in partnership with the 13 tribes of Arizona plus California and Colorado, to inspire natural snow at all U.S. Ski Areas to safeguard America’s water. Arizona SnowBowl was blessed with six feet, which protected its sacred San Francisco Peaks and other drought-challenged ski areas from needing to use wastewater in snowmaking, with unfilterable pharmaceuticals. 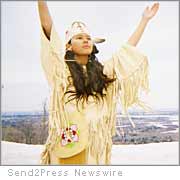 “This was our record snowfall,” said Steamboat’s Olympian Billy Kidd at their first Gratitude Ceremony. “The dancers and Elders from our ‘Ute Future Olympians Ski Program,’ touched everyone.”

“Tsunamis of Appreciation to Red Ute and the Cloud Clan for transforming their Rain-dance to the first Snow-dance. And to Vail’s Bob Parker and Dick Houseman for desperately asking them to help end their opening drought in 1963,” said Chaffee. (CBS’ Huntley-Brinkley Report – http://snow-riders.org/mir.html).

Aspen, the “Greenest Resort in North America,” just closed with their annual (N) Ute Gratitude Ceremony/ski program, the most splendid of all. Given Aspen’s now consistently abundant snowfall, the Snow Gods must love these practical-spiritual solutions.

NVF is a Colorado 501(c)3 partnership of U.S. Tribal leaders, Elders and Olympians, and sponsored by Send2Press.com (a unit of Neotrope(R)), “to create joyful unity thru sports/education to help heal Mother Earth for all our children.”