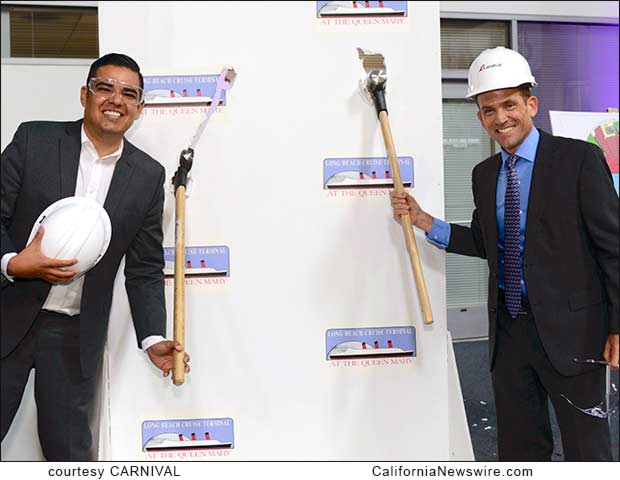 Carnival unveiled its design plans for the terminal during the celebration. The renovation will increase the space Carnival currently occupies in the terminal facility from approximately 66,000 square feet to 142,000 square feet. The expansion and new design will allow for a dramatically enhanced passenger experience and operational flow within the terminal. In addition, the project includes the expansion of portside “cold-ironing” to enable larger ships to plug into the local electric grid to reduce exhaust emissions while docked. Further enhancements to the area surrounding the geodesic dome which houses the cruise terminal and the adjacent Queen Mary attraction are also planned.

“The start of construction on this project further cements our commitment to the City of Long Beach and the outstanding relationships we have built with the leaders and people of this community,” said Carnival’s Torres de Navarra. “Our operations bring tremendous economic benefit to this area and expose hundreds of thousands of people a year to this great city. These new terminal enhancements will further grow that positive impact,” he added.

Carnival has run the Long Beach Cruise Terminal — the United States’ only privately operated cruise terminal — since 2003. It is one of the busiest terminals in North America, with ships docking at the facility five days per week resulting in a more than 70% utilization rate. Carnival has used just a portion of the geodesic dome that housed Howard Hughes’ “Spruce Goose” museum attraction for customs and guest check-in activities. The renovation will make 100 percent of the dome available for Carnival’s cruise operations.

“The expansion of the Carnival Cruise terminal is great news for Long Beach and great news for visitors to our city,” said Long Beach Mayor Robert Garcia. “The added capacity will bring more tourism and economic activity to Long Beach, and we’re pleased to continue working with Carnival for many years to come.”

Currently, Carnival operates three ships from the Long Beach Cruise Terminal — Carnival Inspiration and Carnival Imagination, which offer three- and four-day Baja cruises, and Carnival Miracle which operates week-long Mexican Riviera voyages along with 14- and 15-day cruises to Hawaii and Alaska. In 2018 when the larger Carnival Splendor replaces Carnival Miracle, the line will carry more than 700,000 guests annually from Southern California, operating nearly 250 three- to 14-day cruises a year.

In addition to marking the start of the renovation of the cruise terminal, Torres de Navarra announced a donation of $25,000 to the Mayor’s Fund for Education. The donation, made jointly by Carnival Cruise Line and Carnival Foundation, is part of Carnival Corporation’s ongoing support for nonprofit educational and charitable organizations in the homeport communities where its brands operate.