CHICAGO, Ill. — iExplore (www.iExplore.com) announced today their list of Top Ten Hiking and Trekking Vacation Spots Worldwide as determined by their Adventure Travel Consultants. At #1 is Annapurna Circuit, Nepal: The 186.5 mile, three week Annapurna circuit gets you up close to some of the highest mountains in the Himalayas, and is considered the best hike in the world by many. At #2 is Appalachian Trail: Each year tens of thousands of people set off to complete the entire length of this 2,175 mile trail that takes months to complete, while thousands of others hike just sections of the trail. 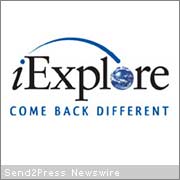 4. Kilimanjaro National Park, Tanzania
Apart from the snow-capped cone of Mount Kilimanjaro, the various routes take you through gorges and past Africa’s amazing wildlife.

9. John Muir Trail, California
Named after the founder of the Sierra Club, you will traverse Yosemite, Kings Canyon, and Sequoia National Parks. Ansel Adams would be jealous.

Founded in 1999, iExplore (http://www.iExplore.com) is the leading online resource for adventure and experiential travel, serving over 1,300,000 visitors per month at its website.

Win entire Treehouse Resort for just $99 and one Photo!