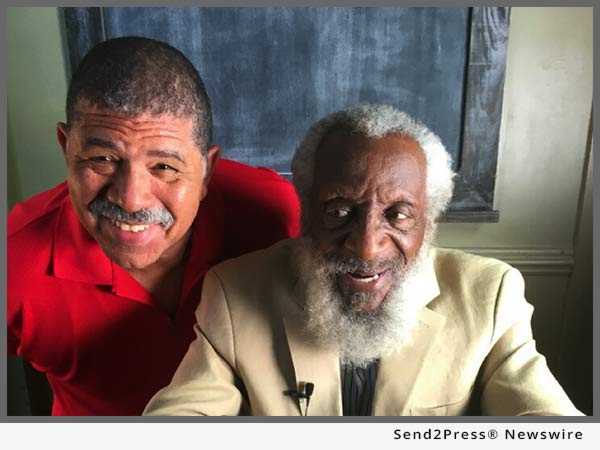 “Turn Me Loose,” debuted May 19 at the Westside Theater in New York City and runs through July 3, 2016. It has received critical acclaim by the New York Times, WABC-TV, and other theatrical reviewers.

Terry has worked on the concept for the production since 2002, and delivered 80 percent of the content for the production via “21st Century State of the Union featuring Dick Gregory,” a 3 CD set is available at http://teesanet.thestore24.com/21st-century-state-of-the-union/9780962549892.

Terry’s initial concept for the play included re-introducing Dick Gregory to a new demographic of Gen Xers and Millennials who may not know about the icon’s contribution to African-American history and politics in addition to entertainment and lifestyle. In 2015, Terry was successful in getting Dick Gregory, 83, a star on the Hollywood Walk of Fame.

To bring his master achievement to fruition, Terry contacted writer Law to pen the play using “Dick Gregory’s 21st Century State of the Union” as the primary resource for the stage play. After years of rewrites and edits, Terry connected with director John Gould Rubin and producer Jackie Judd to bring it to the stage.

“Gregory is a dynamic orator. I have always felt his story needed to be told, as his experience and message become more relevant decade after decade. I had the vision, he had the message and that made us a great team,” said Theodore “Ted” Myles Terry. “I knew it was only a matter of time before funding for this production would follow. I just didn’t realize how much time.”

The “Turn Me Loose” Playbill – http://www.playbill.com/discount/turn-me-loose – states, “John Legend and Get Lifted Film Co. present a new comedic drama about the extraordinary and explosive life of Dick Gregory – starring ‘Scandal’s’ Joe Morton – that shines a light on the first Black comedian to expose white audiences to racial comedy. Gregory confronted bigotry with shockingly disarming humor, marched alongside Martin Luther King, Jr., and deeply influenced comics from Richard Pryor to Chris Rock. He’s been a prolific writer, muckraker, and provocateur, candidate for mayor of Chicago and for president of the United States. He was singled out by President Obama as one of his all-time favorite comedians. Experience the comic genius of Dick Gregory and the poetic final words of his mentor, slain civil rights activist, Medgar Evers: ‘Turn Me Loose.'”

Theodore “Ted” Myles Terry is a celebrity manager most notably since 1998 for legendary comedian and civil rights activist Dick Gregory. His work in music programming is itself legendary among producers throughout the industry, and his vast network takes him inside and behind the scenes of America’s most well known celebrities, especially in the African-American community.

His company, Theodore Myles Publishing, is oriented to music broadcast and streaming on his solely owned platform, UrbanRadio2000.com.