LAGUNA HILLS, Calif. /California Newswire/ — While publishers around the world are restructuring and ceasing production of popular magazines, art and crafting publisher Stampington & Company has been developing new titles to add to their family of publications. In 2009, they will launch a total of eight new titles, which will account for 12 of the 75 issues they will produce during the year. These new publications showcase a broad range of popular trends in the art and crafting industry, including artistic journaling, quilting, “softies,” handmade aprons, and “green” crafting. 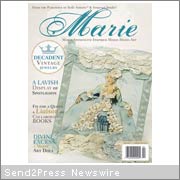 “Because we publish enthusiast magazines, our readers are loyal to the hobbies and special interests we feature in our publications,” says Kellene Giloff, Stampington & Company’s President and Publisher. “Our company is small enough that we can quickly, and cost-effectively, launch a magazine to capture an emerging trend among enthusiastic artists and crafters. This support from our readers allows us to rely on single copy sales, with a higher cover price, more than advertising revenues, which are quickly diminishing in the publishing industry.”

Stampington & Company(R) is the publisher of Somerset Studio, The Stampers’ Sampler, Somerset Memories, Where Women Create, Take Ten, Belle Armoire Jewelry, and 25 other premier art and crafting publications. The company also produces exclusive collections of rubber art stamps and high-quality artist papers. Additional information about Stampington & Company can be found on the Web at www.stampington.com.