SACRAMENTO, Calif. /California Newswire/ — This past week, Calif. Governor Edmund G. Brown Jr. welcomed the states of Aguascalientes, Mexico and Victoria, Australia to the Under2 Coalition – the global pact among cities, states and countries to limit the increase in global average temperature to below 2 degrees Celsius, the level of potentially catastrophic consequences. 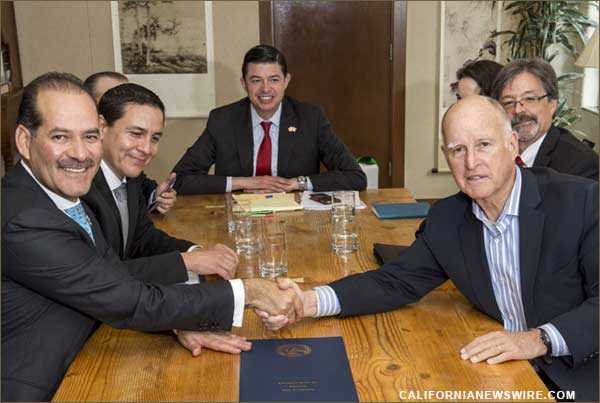 “California will continue to join with leaders across the globe – including our partners in Mexico – to stop climate pollution,” said Governor Brown.

With the addition of today’s signatories, the Under2 Coalition has now grown to 167 jurisdictions representing more than one billion people and $25.9 trillion in combined GDP – more than one-third of the global economy.

Victoria is Australia’s second most populous state, includes the city of Melbourne and covers nearly 90,000 square miles. Aguascalientes is located in north-central Mexico and is home to more than 1 million people. Aguascalientes Governor Martín Orozco Sandoval signed the pact during a meeting today with Governor Brown.

The Under2 Coalition, the collective of governments who have signed or endorsed the Under2 MOU, was formed in 2015 by the states of California and Baden-Württemberg, Germany to mobilize and galvanize bold climate action from like-minded city, state and regional governments around the globe. Coalition members pledge to limit greenhouse gas emissions to 2 tons per capita or 80-95 percent below 1990 levels by 2050.

Later today, the state of Aguascalientes will also sign an agreement with the California Energy Commission to cooperate on clean energy programs and policies, including energy efficiency, renewable energy development and grid integration, low and zero-emission vehicles and clean energy technology.

This action builds on landmark legislation the Governor signed in October 2015 to generate half of the state’s electricity from renewable sources by 2030 and double the rate of energy efficiency savings in California buildings. Governor Brown has also committed to reducing today’s petroleum use in cars and trucks by up to 50 percent within the next 15 years; make heating fuels cleaner; and manage farm and rangelands, forests and wetlands so they can store carbon.

The Governor has traveled to the United Nations headquarters in New York, the United Nations Climate Change Conference in Paris, France, the Vatican in Italy and the Climate Summit of the Americas in Toronto, Canada to call on other leaders to join California in the fight against climate change. Governor Brown also joined an unprecedented alliance of heads of state, city and state leaders – convened by the World Bank Group and International Monetary Fund – to urge countries and companies around the globe to put a price on carbon.

These efforts to broaden collaboration among subnational leaders build on a number of other international climate change agreements with leaders from the Czech Republic, the Netherlands, Mexico, China, North America, Japan, Israel, Peru and Chile and Governor Brown’s efforts to gather hundreds of world-renowned researchers and scientists around a groundbreaking call to action – called the consensus statement – which translates key scientific climate findings from disparate fields into one unified document.

The impacts of climate change are already being felt in California and will disproportionately impact the state’s most vulnerable populations.

More information about the Under 2 Coalition can be found at www.under2MOU.org.