SACRAMENTO, Calif. /California Newswire/ — Governor Arnold Schwarzenegger today released a public service announcement (PSA) in conjunction with the California Highway Patrol (CHP) and the Department of Transportation (Caltrans) to alert and remind motorists of an often forgotten law that can mean the difference between life and death. The Move Over, Slow Down law, which became effective January 1, 2007, requires motorists to either move over or slow down whenever they approach a stationary emergency vehicle displaying emergency lights, a stationary tow truck or marked Caltrans vehicle that has its flashing amber warning lights activated. 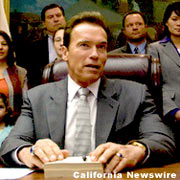 “This safety message serves as a reminder to all California motorists that adhering to a simple law can save lives. Already this year, we have lost three CHP officers in roadside incidents that were both tragic and preventable,” said Governor Schwarzenegger. “By moving over, slowing down and providing space to law enforcement, emergency personnel and highway workers we can help prevent such tragedies from occurring on the side of the road. I encourage all California drivers to listen to this PSA and help save lives.”

Between June 9, 2010, and June 27, 2010, three CHP officers were struck by passing vehicles while conducting law enforcement business along the side of the highway. Not only did all three incidents result in the loss of the officers’ lives, but all could have been prevented by more responsible driving.

“CHP and our partners like Caltrans know the grief of losing employees doing their job on the side of the road. It only takes a split second of inattention to destroy the lives of so many people,” said CHP Commissioner Joe Farrow. “Not only did three heroes lose their lives doing their job, children lost fathers; wives lost husbands; parents lost sons; and fellow officers lost brothers.”

Governor Schwarzenegger’s goal with this radio and television traffic safety campaign is to remind the motoring public of the law and give those who do business along the side of the California’s roads a safer place to work.

Caltrans Director Cindy McKim says it is essential to ensure the safety of highway workers as well.

“Caltrans employees face the dangers of fast-moving traffic on a daily basis,” said McKim. “We appreciate the leadership and recognition of the Governor for the need to provide a safer working environment for our employees and encourage all motorists to heed this PSA.”

To view the PSA, visit http://www.chp.ca.gov/psa.html. The CHP has sent copies of the PSA to television and radio stations throughout California.