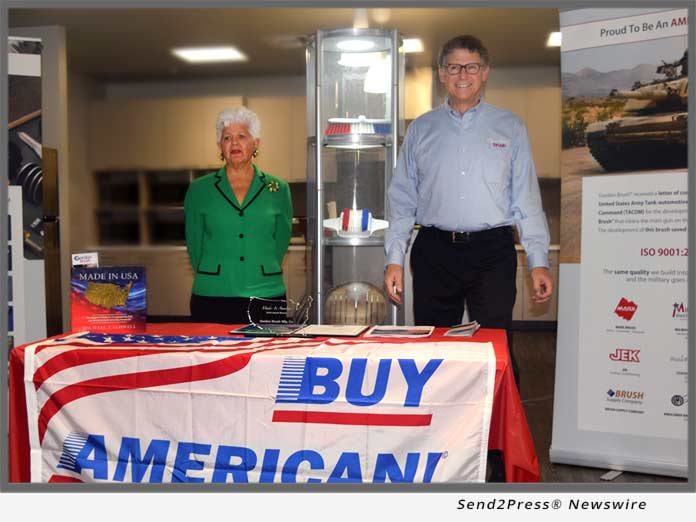 “All of this could not have been possible without my valued, long-tenured, skilled employees. I have over 150 employees, plus their families, for who I am responsible,” adds Rakusin.

“Congratulations to Ken Rakusin for receiving Congressional Recognition for his leadership at Gordon Brush, a proud American business,” Napolitano said.

She added, “We salute his ongoing commitment to manufacturing products in the San Gabriel Valley, which supports local jobs and benefits other businesses in our region and beyond. This well-deserved honor recognizes his extraordinary efforts to promote American-made goods and preserve the economic health of our nation.”

Mr. Rakusin presented the Congresswoman with a book, “MADE in USA,” an elegant tribute to 12 companies that are proud to build and buy AMERICAN. “The Congresswoman and Democratic Whip Steny Hoyer are forever immortalized in the history of the Company with a picture in the Gordon Brush chapter,” Rakusin told the Congresswoman.

Gordon Brush Mfg. Co., Inc., is an ISO 9001:2015 certified American manufacturer of brooms and brushes. Established in 1951, Gordon Brush(r) includes two brands whose origin dates back to 1855 and 1897. The Company manufactures the FootMate(r) System and over 17,000 standard and custom brushes, selling to a multitude of industries including: janitorial, medical, electronics, manufacturing, military, aerospace, and pharmaceutical in its state-of-the-art, 183,000 sq. ft. manufacturing facility in the City of Industry, Calif.

Gordon Brush has made brushes for the United States Army to clean the main gun on the Abrams tanks, saving the Department of Defense over $1.5 billion. The Company also has made brushes that were used on the space shuttle, the lunar module, and brushes to clean the guidance system and guns on the Apache helicopter.

Learn more about the Company at: https://www.gordonbrush.com/.