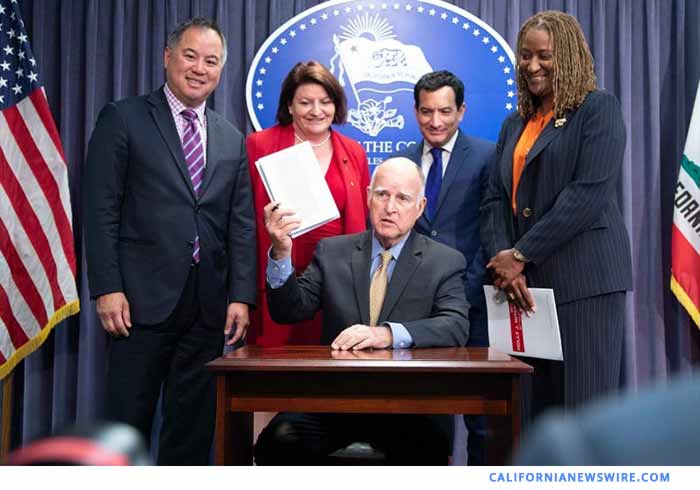 “When I took office back in 2011 with the state facing a $27 billion deficit, I pledged to work with the Legislature to fix California’s financial mess,” said Governor Brown. “Today, the final budget I sign delivers on that pledge and prepares us for the future.”

“This budget is the product of all of us working together to craft a fiscally responsible plan that serves the people of California while at the same time saves for the future,” said Senate President pro Tempore Atkins. “I especially want to thank Governor Brown’s leadership – in this, his last budget – for helping to bring back California from a historic recession and onto a solid economic footing.”

“Devastating budget cuts first compelled me to run for the Assembly. I thought we needed to do better, and this budget does better,” said Assembly Speaker Rendon. “There is more to do, but by investing in our people and saving for the future, this budget gives us the tools we need to keep doing better.”

“Governor Brown has done an admirable job in leading our state out of budget deficits to financial stability. This is a spending plan we can be proud of because it makes the right investments and reflects many of California’s values,” said Assemblymember and Assembly Budget Committee Chair Ting. “I’m especially glad we were able to partner with cities and counties to help them address the homeless crisis with unprecedented funding for more shelters and services.”

“This budget strikes an appropriate balance that strengthens our state’s fiscal stability with an unprecedented level of reserves, while prioritizing investments that will address the pressing needs of this state,” said Senator and Senate Budget and Fiscal Review Committee Chair Mitchell. “We continue to work toward restoring programs that still have yet to be made whole from devastating cuts during the great recession and prioritize funding to confront the challenges associated with homelessness and disaster response.”

Significant Details of the 2018-19 State Budget:

The state’s Rainy Day Fund, established by a vote of the people in 2014, saves money when the economy is strong for uncertain times ahead. By the end of 2018-19, the current economic expansion will have matched the longest in post-war history. The budget fully fills the fund, growing the balance to an unprecedented $13.8 billion.

Supporting our Schools
The budget increases funding by more than $4,600 per student over 2011-12 levels and directs $78.4 billion in funding to K-14 schools – a 66 percent increase in annual funding from seven years ago. Additionally, the state will fully implement the Local Control Funding Formula, correcting historical inequities in school district funding.

Counteracting the Effects of Poverty and Combatting Homelessness

This budget delivers the first full year of funding under Senate Bill 1 – the state’s Road Repair and Accountability Act – with $4.6 billion in new transportation funding in 2018-19. The funding will repair neighborhood roads, state highways and bridges, fill potholes, ease congestion in busy trade and commute corridors and improve and modernize passenger rail and public transit.

The budget includes a $1.4 billion Cap and Trade Expenditure Plan to invest in programs that further reduce carbon pollution and support climate resiliency efforts, including $210 million for forest improvement and fire prevention projects that protect the state’s forests from wildfires and $334.5 million for the California Energy Commission and the California Air Resources Board to begin the implementation of a multi-year initiative to accelerate sales of zero-emission vehicles through vehicle rebates and infrastructure investments.

The budget provides $79 million to support hardworking immigrants through a number of legal services programs, including deportation defense, naturalization services and DACA assistance.

The budget and related acts signed by the Governor today include:

For full text of the Budget Act and associated legislation, visit: www.leginfo.legislature.ca.gov. Additional details on the 2018-19 State Budget can be found at www.ebudget.ca.gov.