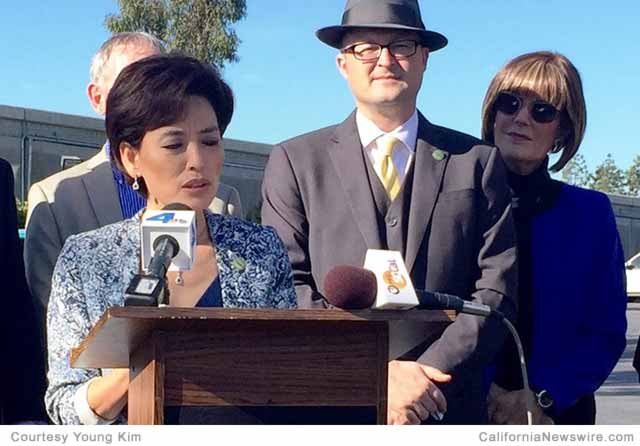 COSTA MESA, Calif. /California Newswire/ — Calif. State Assemblywoman Young Kim (R-Fullerton) today announced that she has formally introduced state legislation to require a two-thirds vote of the Orange County electorate before any new toll facility in the county could be constructed on a public freeway.

Kim, who made the announcement along a stretch of the I-405 Freeway that Caltrans officials have targeted for new controversial toll lanes, stated that she wanted to allow Orange County voters the decision on whether or not they wanted toll lanes on their public freeways.

“We cannot allow Caltrans to force toll lanes down our throats,” stated Assemblywoman Young Kim, a member of the Assembly Transportation Committee. “It should be the decision of the residents of Orange County, not of the state bureaucrats in Sacramento. The Orange County Transportation Authority has twice voted to reject toll lanes on the I-405 Freeway, yet Caltrans continues to try and march forward.”

The cities along the northern stretch of the I-405 Freeway in Orange County have banded together and formed the “405 Freeway Cities Coalition” to formally fight the proposal to add toll lanes along the stretch of the freeway between the SR-55 Freeway in Costa Mesa and the I-605 Freeway at the Los Angeles County border. The six cities and unincorporated area of Rossmoor have held town hall meetings, lobbied OCTA and various state legislators, and held press conferences in their effort.

“We would prefer that Caltrans and OCTA add two additional free lanes to the I-405 freeway, rather than toll lanes,” stated Westminster Councilwoman Diana Carey, a member of the 405 Freeway Cities Coalition who attended Assemblywoman Kim’s press conference. “We are excited that the Assemblywoman has decided to take Caltrans on regarding their decision.”

“It is great that Assemblywoman Young Kim is fighting back for the residents of Orange County and has chosen to introduce AB 1459 in the California State Legislature,” said Seal Beach City Councilman Gary Miller, an OCTA Board Member and member of the Coalition. “I applaud and support her courageous leadership to take our battle to Sacramento.”

“Before joining the Assembly, I spent two years on the OCTA Board of Directors fighting to keep toll lanes off our freeways,” added State Assemblyman Matt Harper (R-Costa Mesa) who also attended Tuesday’s press conference to support the Assemblywoman. “Now that this fight has moved to Sacramento, I am pleased to be coauthoring Assemblywoman Young Kim’s legislation and look forward to working closely with her to help keep our freeways free.”

Assemblywoman Young Kim is the first Korean American Republican woman to be elected to the State Assembly and the first Asian American to represent the 65th District in Sacramento, which includes the communities of Buena Park, Cypress, Fullerton, La Palma, Stanton and W. Anaheim. More info: http://ad65.asmrc.org/