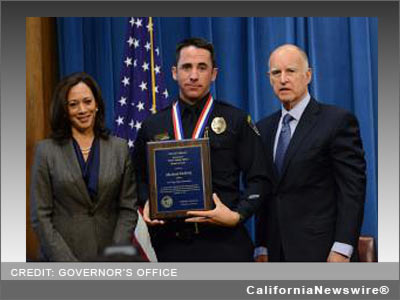 SACRAMENTO, Calif. /California Newswire/ — On Thursday, Calif. Governor Edmund G. Brown Jr. was joined by Attorney General Kamala D. Harris to present the Public Safety Officer Medal of Valor to 14 law enforcement officials who went above and beyond the call of duty.

“Character, leadership and being able to act in difficult and uncertain circumstances – that’s what we honor today,” said Governor Brown. “These are the kind of values that we absolutely need to have a society that holds together.”

“The law enforcement officers we honor today are true heroes,” said Attorney General Kamala D. Harris. “Their actions and courage exemplify the highest level of public service. California is truly a safer place because of them.”

The following individuals were awarded the Public Safety Officer Medal of Valor today:

On April 12, 2012, Stanislaus County Sheriff’s Deputy Robert Paris along with a citizen locksmith, Glendon Engert, were attempting to evict a tenant from an apartment. As Deputy Paris stood at the door, the tenant opened fire from inside the apartment with a high powered assault rifle. Deputy Paris and Mr. Engert were mortally wounded.

A make shift mobile cover was created by placing a ballistic shield across the front passenger window of a marked Modesto police patrol car. The car was driven slowly on to the lawn of the apartment complex. The officers took cover on the driver’s side of the patrol car and moved as one unit with the patrol car, as it slowly moved towards the two victims.

Sergeant Johnson also sustained a gunshot wound, returned fire and called for assistance. Deputy Spears shielded Sergeant Johnson with his body and then kicked open the door of a neighboring apartment so they could take cover inside.

A short time later the suspect crawled out of his apartment and was held at gunpoint by Deputy Spears and Deputy Steven Clarke. The arrest team took the suspect into custody. Detective Perez and Sergeant Johnson were both rushed into emergency surgery and are recovering from their injuries.

On September 25, 2012, the San Diego Sheriff’s Department was investigating a child sexual abuse matter in Lakeside with probable cause to arrest a suspect.

A team of deputies approached the suspect’s apartment complex located one block from a high school, which was in session. While attempting to make contact with the suspect, the suspect began shooting at the deputies. Detective Perez and Sergeant Johnson were struck by gunfire and seriously injured. Several deputies returned fire, striking the suspect as they moved to cover. Although wounded, the suspect continued to fire at the deputies.

Officer Michael DeWitt, San Diego Police Gang Suppression Team/S.W.A.T., was driving to work and observed the incident. Officer DeWitt heard gunshots and immediately donned his S.W.A.T. gear to provide assistance by assembling a team of deputies and administer tactical assignments. The team moved up the stairway to rescue the detective, even though the suspect continued to fire his gun. The team was able to carry Detective Perez to safety.

Additionally, a woman and two small children ran from the apartment complex in panic. Observing they were in the suspect’s line of fire, Officer DeWitt left his position of safety, ran toward the woman, picked up her four-year-old child, as the woman carried her infant. Officer DeWitt directed her to follow him across the street to safety.

Sergeant Johnson who was seriously wounded, and another deputy, remained in danger in an adjacent apartment next to the suspect’s. Officer DeWitt ran back to the complex to assist with the rescue of Sergeant Johnson and apprehension of the suspect.

Detective Perez and Sergeant Johnson were rushed to surgery and are recovering from their injuries.

Officer Dane Norem of the California Highway Patrol was dispatched to a call of a possible suicidal male pedestrian who was climbing the overpass fence directly over State Route 91. Unknown to Officer Norem, the pedestrian was a local transient who was under the influence of illicit drugs and had been experiencing paranoid thoughts against law enforcement personnel.

Officer Norem believed if the pedestrian jumped onto the freeway (approximately 40 feet) that not only would the pedestrian die but that unsuspecting freeway drivers and passengers would be in severe danger, as well. Officer Norem grabbed the pedestrian’s right leg as he straddled the top of the fence. In an attempt to free himself, the pedestrian, now a suspect, pulled a utility knife from his jacket and stabbed Officer Norem multiple times in the face, arm and upper shoulder.

As the suspect began stabbing Officer Norem, two off-duty law enforcement officers stopped to assist. The officers ordered the suspect to drop the knife and the suspect refused to do so and waved the knife toward officers.

When a second CHP Officer arrived, the officer used a less-lethal shotgun and fired one round at the suspect. The less lethal round caused the suspect to fall off the top of the fence and back onto the overpass where he was immediately taken into custody.

Officer Norem was transported to a hospital and underwent surgery for his stab wounds and severe eye injury. The suspect was taken into custody and booked on several charges, including attempted murder of a peace officer.

Calif. Gov. Gov. Brown Announces Appointments for May 22-31 2018 including to Health and Human Services Agency