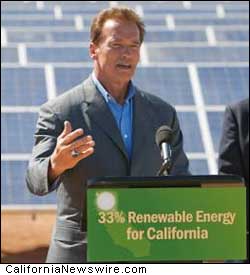 “Today is a truly historic day for children and parents throughout the state of California – and for the future of our state’s education system,” said Governor Schwarzenegger. “President Obama called for positive change across the nation and California’s leaders answered that call. Working together we have passed sweeping education reforms to better our children’s education, empower parents and make California highly competitive for much needed federal funding for our schools.”

In addition to ensuring California’s application for Race to the Top is highly competitive, the signing of these legislative measures into law demonstrates California is ready to break away from the status-quo and work to truly improve education for students – as envisioned by President Obama’s Race to the Top initiative. The reforms contained in SBX5 1 and SBX5 4 will change the culture of education in California by empowering parents to have a true voice in making choices for their children and ensuring their voices are heard at every level of their school district. Intended to address Obama Administration competitiveness requirements, highlightsof these reform measures include:

“California now has a bold action plan to empower parents, embrace accountability, transform under-performing schools and help give every child equal access to education and to success,” said Governor Schwarzenegger. “For years we’ve imagined a day when parents have the right to move their child out of a failing school and the right to make major changes in chronically underperforming schools – in California that day has arrived.”

On July 24, 2009, President Obama and U.S. Department of Education Secretary Arne Duncan announced federal eligibility and competitiveness requirements for states to compete for $4.35 billion in Race to the Top funding, the single largest pool of discretionary funding for education reform in U.S. history. On August 20, Governor Schwarzenegger called a special session of the legislature and announced a legislative package to ensure California is eligible and highly competitive for this funding.