SANTA MONICA, Calif. — Recognizing that good design need not stop at the door to the kid’s room, the CA Boom design show will for the first time ever include a “Modern Parenting Zone,” a new and exciting display of the latest in modern design for babies, kids, and contemporary parents. CA Boom’s Modern Parenting section will showcase how designers and manufacturers are meeting the needs of today’s parents. Participating exhibitors include Boon, ducduc, Kalon Studios, Litto Kids, Nurseryworks, Scandinavian Child, TrueModern and Not Neutral.

“As more and more people realize that design is a lifestyle, one hot area that has emerged is the kid’s arena,” says CA Boom founder and executive producer Charles M. Trotter. “Good design should be integrated into every room of the house, not just the office and the other ‘adult’ areas,” he adds.

CA Boom 4: The West Coast Independent Design Show runs March 30 to April 1, 2007, at the Santa Monica Airport’s 50’s-era Barker Hangar. As in years past, the show expects to see a significant number of architects and designers attend with their small children. “The fact that we allow kids makes us unique among trade shows,” says Trotter. 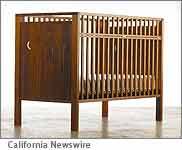 “The Modern Parenting Zone was a natural outgrowth of what we saw at our show, which was design trade professionals and early adopter consumers attending with their families,” says Trotter. “And it reflects the demographic of our exhibitors, many of whom are young designers and first-time parents who saw an opportunity to deliver a product that was missing from the marketplace.”

This is the case with TrueModern, a San Francisco-based furniture and textiles company specializing in children’s furniture and accessories. Founded in 2006 by Edgar and Julia Blazona, veteran designers of Pottery Barn and West Elm, TrueModern strives to create high quality, minimalist furniture at an affordable price. When they became parents four years ago, the Blazonas discovered firsthand the uninspired choices in the youth market.

“Kids furniture has traditionally been overlooked in the modern market. In particular, we saw a need for a more sophisticated color palette and for modernist storage solutions to contain the mountains of toys,” says Edgar Blazona, founder and principal, TrueModern.

“There’s more to baby design than pink or blue, ducks and bunnies,” says Robert Yang, publisher of Coochicoos.com, a website devoted to sophisticated children’s furniture and accessories and a sponsor and co-creator of CA Boom 4’s Modern Parenting Zone. “We love the design trends that are happening in the market today for the modern parent.”

Yang, a former architect, first collaborated with Trotter last year on a small booth curated by Coochicoos at CA Boom 3 as a kind of pilot project to see if there was interest among attendees. The success of that venture led to the expanded Modern Parenting Zone at this year’s show. Yang notes that publications like Dwell Magazine and design-savvy retailers like Ikea and Target have made modern design more accessible. Now, their readers and customers who are parents are insisting on baby furnishings that are similarly well-designed. As part of the Modern Parenting Zone, Coochicoos will also be coordinating a specially selected exhibit of the “What’s Next” in contemporary modernist design for children.

The movement towards sophisticated infant and children’s furniture and accessories mirrors what is already happening in music and clothing, with Generation X and Y parents sharing everything from their Dan Zanes albums to their Von Dutch label clothing with their kids.

“Trends are very important to us,” says Erin Lane of Scandinavian Child. “With the recent surge in orange over the past year or so, we’ve come out with our orange Svan Cushion and the Chocolate/Orange Bouncer, which has done phenomenally well. With the trend toward darker furniture, we debuted not only the espresso high chair but new espresso mini furniture as well,” she adds.

In addition to staying true to the clean lines, sophisticated colors and uncluttered, unfussy modernist aesthetic, Modern Parenting Zone participants are ahead of their mass-market counterparts in striving to deliver style with sustainability. “When the children who enjoy our designs grow up, we want them to enjoy the planet. And we are doing everything to make sure they can,” says David Harris, design director of New York-based design collaborative ducduc. For ducduc, this includes manufacturing their products domestically, in their case in Connecticut.

“We love exhibiting at the CA Boom Show, since it attracts a crowd that always appreciates good design. We think the addition of the Modern Parenting section will be very well received,” says Kate Benjamin, director of marketing at Boon Inc., based in Tempe, AZ.

“There are so many talented companies on the West Coast and the audience is ripe for a growing showcase like CA Boom for this talent,” says Traci Fleming of California-based Nurseryworks. “We knew firsthand after seeing the show last year as an attendee that the 2007 show would be a huge success!”

Admission is $20; Friday is trade-only. Saturday and Sunday is open to all. Design + Architecture tour ticket (includes same-day or return visit to the exhibit) is $75 or $200 for a three-day tour pass. For more information and two purchase advance tickets, please visit http://www.caboomshow.com.