OJAI, Calif. — Global Resource Alliance (GRA), a California-based 501(c)(3) non-profit, announces the launch of its “Buzz-Off Malaria” campaign. The organization will provide a World Health Organization (WHO) approved Long Lasting Insecticide Treated mosquito bed Net (LLITN) and a bottle of homeopathic neem tincture, a safe, natural malaria prophylactic, free of charge to a child living in the Lake Victoria region of Tanzania for each person going to their website (www.globalresourcealliance.org) and joining the Buzz-Off Malaria campaign.

Malaria remains the number one killer of children in sub-Saharan Africa. According to UN estimates, every thirty seconds a child in Africa dies from malaria. The combination of LLITNs and neem tincture has proven to be a very safe, effective and affordable way to address this situation. 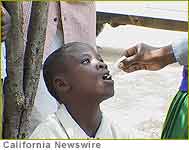 In natural medicine, the neem tree (Azadirachta indica) is recognized as an effective treatment for many diseases. The first record of its use dates from about 4,500 years ago. And although neem has been used in India for thousands of years, this natural treatment was not introduced to the Western world until recently.

In 2005, GRA introduced a homeopathic neem tincture in the Lake Victoria region that was originally developed by the Abha Light Foundation in Nairobi, Kenya for the prevention and cure of malaria. This homeopathic remedy is an ethanol based tincture carrying the medicinal properties of neem leaves. The tincture is easily produced, and a six-month supply for one person costs less than a dollar. Studies conducted by doctors in the region have shown that the preparation can reduce malaria incidence by over 80% after six months of use.

Most malaria carrying mosquitoes bite at night, making mosquito bed nets especially important in the prevention of the disease. Studies have shown that nets can reduce malaria incidence up to 50% and deaths by up to 20%, but at present, as few as 1% of children living in sub-Saharan Africa sleep under bed nets.

A new generation of nets was developed in Japan several years ago and is now being manufactured in Tanzania. The nets have permethrin, an insecticide deemed safe for children by the World Health Organization, embedded in tough plastic fiber. Their insecticidal properties remain effective for about five years, which is also the life span of the net.