LOS ANGELES, Calif. — ThinkBox Inc. today announces the release of “Showy Show! Preschool Show,” the first in a new live action educational video series for 2-5 year olds. The “Showy Show” series is specifically designed to use music and participation to help kids and their parents get ready for the major challenges of childhood such as going to preschool, going to bed, and having a sleep over. The child is encouraged to participate as the “star” of “Showy Show,” and each show is filled with opportunities to develop early literacy skills. The first show in the series,”Showy Show, Preschool Show,” is now available for purchase at www.showyshow.com.

“Showy Show, Preschool Show” aims to prepare a 2-5 year old for preschool. Children learn the who, what, why, where and how of a preschool day with song and dance numbers and funny skits. Throughout, they are exposed to a literacy-rich environment so that essential early reading skills are developed. By the end of the fun-filled show, both parents and children will be less mystified about preschool, and more open to the joy of their journey together. 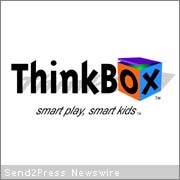 “Showy Show” was created by a mom in response to her own need for help in confronting the major milestones of childhood with her young daughter. “We wanted to create something fun and entertaining that would help parents and kids to happily conquer some of the tricky moments in childhood,” said Jennifer McCaffrey, Executive Producer of Showy Show. “It was also important for us to create a show that kids would love and learn from, but wouldn’t make today’s hipper parents cringe.”

“ThinkBox has always been committed to the development of the whole child, including their academic, social, and emotional development,” says Brian Napack, CEO of ThinkBox. “With ‘Showy Show,’ Jennifer McCaffrey has created an engaging tool that will allow kids and their grown-ups to learn and grow together while they share the joy of tackling some of the key challenges of early childhood.”

“Showy Show!” is built on the pedagogical approach of active learning used in High/Scope Preschool Curriculum(SM), which has guided many preschool learning programs. Through a process called Watch-Play-Show(TM), each “Showy Show!” episode’s songs and activities support the entire cycle of learning for both child and parent. The three stages of Watch-Play-Show help kids to understand that they are competent thinkers, decision-makers and problem-solvers. Throughout the repeating Watch-Play-Show cycle, adults and children enjoy sharing the process with each other.

Children’s author releases latest in ‘Glad to Do It!’ series about first responders