NEWPORT BEACH, Calif. — They are not just another pretty face. BMD Modern Hoods announces their new line of contemporary kitchen range hoods – designed for residential use, but with commercial grade performance. With a powerful and sleek design, these kitchen range hoods deliver more than just visually stimulating designs, they deliver high functionality and quality performance. “While there are other high-end hood companies out there,” Brian Mayer, CEO and head designer of BMD Modern Hoods, says, “no one can compete with our price point, delivery time or performance.” 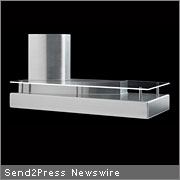 Mayer started BMD Modern Hoods out of necessity. An interior designer for kitchens and baths, he was working with a client who was looking for something new and different. Mayer searched on the Internet and could not find anything that was suitable. This prompted him to create his own line of residential hoods with commercial grade performance.

“I found sleek designs on the Internet, but they had minimal power packages,” he explains.

Power packages refer to cubic feet per minute (CFM) of exhausting airflow; the higher the number, the greater the amount of air that is exhausted using the range hood.

The National Kitchen and Bath Association recommends a minimum of 150 CFM for all cooking appliances. However, modern cooktops produce ever-increasing amounts of heat and volatile organic compounds (VOCs), and quite often a much more powerful blower is called for.

The current models being offered at BMD Modern Hoods have a CFM output of 1200. They are stainless steel construction with a brushed finish. Alternative finishes and custom options are also available.

“Our focus is on combining esthetics with function,” Mayer says. “They are showpieces that work.”

BMD Modern Hoods is also able to provide a better lead time and price point than its competitors.

Most hoods of this quality, if you can find them, would be approximately $8,000 with a six to eight week delivery time. However, the hoods at BMD Modern Hoods start at about $5,700 with a lead time of three weeks. The company attributes this to their current manufacturer – they do not inflate prices and they are proud of their quality and workmanship. They are vested in delivering a high-end product at a fair price.

Founded in 2004, the company was formed in response to meet the need for a fresh design approach. Their philosophy is that no client should be forced to choose between power and quality or elegant design and beauty; they should have the option to combine both. Currently, there are nine model choices with more expected in the future.