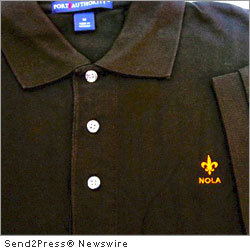 NEW ORLEANS, La., March 23, 2012 (SEND2PRESS NEWSWIRE) — Just when you thought the gulf coast was settling into the long path to recovery, another devastating blow was dealt to the city of New Orleans this week, says local clothing company NOLA Shirts. “The nation is still stunned from the early weeks news of the unprecedented suspension of New Orleans Saints coach Sean Payton for the next season,” says Gretchen Zito, of NOLA Shirts.

For the first time in NFL history, Payton is the first head coach suspended by the league for any reason, accused of trying to cover up a system of cash incentives to players for performance within a game – what has become named a bounty system: extra cash for players who deliberately take an opposing player out of the game. While similar systems have existed in a shadowy form in several teams, as well as several other sports, this was the highest profile revelation of such a practice, and NFL Commissioner Roger Goodell appears to be making the New Orleans Saints the example – by dealing out the harshest punishment to a team in NFL history.

Not only was the head coach, Sean Payton, suspended for a year without pay, the former defensive coordinator, Gregg Williams, completely banned from the league, a $500,000 fine was issued to the team, their second-round draft picks were also taken away, and the Saints General Manager Mickey Loomis was banned for the first eight regular-season games next season, and the assistant coach Joe Vitt has also been banned for the first six games. This again set a new precedent – it is believed that this was the first time a general manager was suspended by the NFL. All of this, in the coming year – in which the Super Bowl is to be held in the city of New Orleans, the Saints’ home city.

This overwhelming and crippling decision to completely eviscerate a NFL football team is an attempt to show other teams how serious the NFL commissioner, Roger Goodell, is taking this issue – yet, the ruling is being discussed across the nation as a whole, and will have a ripple effect in the Nation Football League. Continuing discussions go on as the commissioner also determines a pending punishment for players as well – and this is being reviewed by the NFL Players association.

This all comes as another major blow to the city of New Orleans, after several hits have impacted the city in past years. Natural disasters such as Katrina, oil spills in the Gulf, the entire rebuilding process, the mass exodus and return of citizenry to the area – and now this almost fatal blow to one of the spiritual hearts of the city – the New Orleans Saints. Even in the harshest times, and the most depressing years of recent history, the people of New Orleans have rallied behind their home team with an almost religious fervor – every time a game is played, the city is dressed in the famous black and gold to celebrate and share in the games.

Billy Schell, of NOLA Shirts commented on the emerging trend: “When the times get rough, this city does not give up – not on its team, not on its people. We stand together – and have pride in who we are, what we have been through, and what we will continue to accomplish as a city – and while we may be punished to serve as an example to the other cities teams, you will be surprised at how the New Orleans spirit reacts – it will only get stronger and more determined. We are already seeing a huge increase in the sales of black and gold hats, shirts and the like – people here want to show that we are not going give up – and we will come back from this stronger than ever.”

NOLA Shirts continues to provide awareness for the Crescent City – through its hardships, and its celebrations. The subtle message of pride and hope have helped it to become a quiet success story in the midst of all of the turmoil, and the future continues to look brighter – both for the city, and its recovery from recent times, and for its residents – like Billy Schell, who decided that even in the worst of times, showing some civic pride and his love for the Crescent city, he would create a way to allow others to embrace New Orleans soul and spirit – with style.

About NOLA Shirts:
NOLA Shirts is the proud provider of high quality shirts, hats, and apparel embroidered with the many symbols of New Orleans spirit and soul – the Mardi Gras Crown, the famous Pelican, and the venerable Fleur De Lis. These products were designed to help others show their love of one of America’s most authentic cities, but to also represent and embody the resilient spirit of the people and culture of New Orleans. To learn more about NOLA shirts, you can visit their website at http://www.nolashirts.com – or contact Gretchen Zito, director of marketing, at (601) 955-0225.

News Source: NOLA Shirts LLC :: This press release was issued on behalf of the news source by Send2Press® Newswire, a service of Neotrope®. View all current news at: http://Send2PressNewswire.com .

Jerron Wilbut Declares for the NBA Draft, Coach Michael Miller and the University of Los Angeles College of Divinity Announce