SAN DIEGO, Calif. /California Newswire/ — Bank of Southern California, N.A. (OTC Pink: BCAL / OTCMKTS:BCAL) announced quarterly earnings of $1,072,303 for the first quarter of 2018, a 51% increase compared to $710,022 for the first quarter of 2017. Results for the quarter ended March 31, 2018, include approximately $320 thousand in expenses related to the pending acquisition of Americas United Bank (OTC Pink: AUNB). As previously announced, the Bank also completed a private placement offering of common stock of approximately $26 million during March 2018.

“Building from the successes of 2017, Bank of Southern California had a strong start to 2018. Our loans and deposits grew 17% and 16%, respectively, compared to the first quarter of 2017, while net interest income grew 24%. In the first quarter, the Bank was also recognized as a top SBA 7(a) lender by the San Diego District Office of the Small Business Loan Administration and was awarded a Super Premier Performing Bank status by The Findley Reports,” commented Nathan Rogge, President and CEO of Bank of Southern California.

“I am delighted that we continued to organically grow our loan and deposit portfolios in San Diego County, the Coachella Valley, and Orange County in the first quarter, when much of our energy was focused on planning for the acquisition of Americas United Bank (AUNB), as well as successfully completing a $26 million capital offering,” concluded Rogge.

A growing community bank established in 2001, Bank of Southern California, N.A., with headquarters in San Diego, Calif., is locally owned and managed, and offers a range of financial products and services to individuals, professionals, and small-to-mid sized businesses. The Bank’s solution-driven, relationship-based approach to banking provides accessibility to decision makers and enhances value through strong partnerships with its clients. The Bank currently operates seven branches in San Diego and the Coachella Valley in Riverside County, and a production office in Orange, Calif..

For more details about our quarterly results, please visit the “About Us” / “Financials” page of our website and follow the link labeled: Quarterly Results and Trends – https://www.banksocal.com/about-us/financials/ 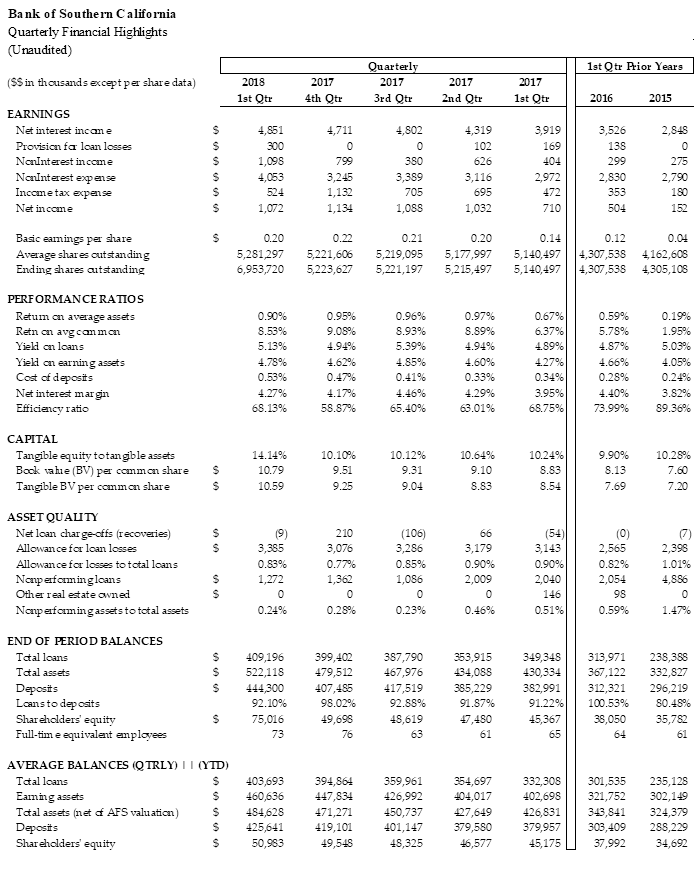