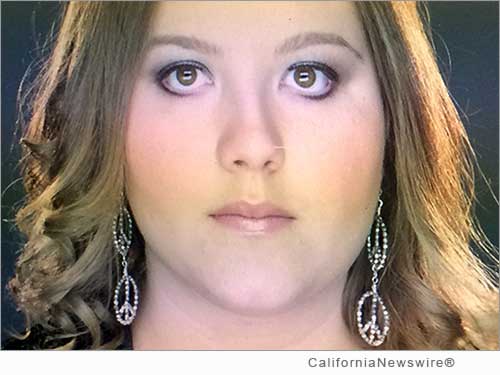 LOS ANGELES, Calif. /California Newswire/ — The word "autism" strikes fear in most people's hearts but teen Autumn Sky Wolfe is battling it with a singing career and bold live performances. "Here is a young woman who is unshakable in her delivery of a song," states manager Meredith Day of Starmaker Machinery. "When she performs, she exhibits resolve and power that can uplift the entire audience."

In addition to her live appearances, Wolfe has recordings on iTunes and CDBaby and this year received two nominations in the annual New Music Weekly magazine awards program. The teenager is up for Best New Adult Contemporary Artist as well as Crossover Artist of the Year.

The recognition from the magazine was a surprise. "We didn't even know about the possibility of the nominations until after they came out," Wolfe states, "and it is amazing to be mentioned alongside Sam Smith and my favorite artist, Meghan Trainor."

Wolfe's transition from amateur to professional was fortuitous: "I discovered Autumn singing along to music videos in an office one day. She was very raw, but I knew with the right guidance she could be a really beautiful singer," states Day. "Now, the world is starting to find out about her."

The 18-year-old Autumn Sky Wolfe is an inspiration to many. She was diagnosed with Autism Spectrum Disorder in 1998 at two years old and her parents were given a long list of things she supposedly wouldn't be able to do — but Autumn transcended all expectations. People meeting her are often unaware of her autism and just think she is shy. In addition to reading music, she has a remarkable memory for melody and lyrics and can modify a musical pattern on a nearly instantaneous basis. More information: http://www.autumnskywolfe.com/ . Autumn Sky Wolfe's music is on iTunes and CDBaby.

Meredith Day founded Starmaker Machinery in 1985 to help artists who reminded her of herself as a teenage "wannabe" folksinger. Over the years her projects have included many significant artists, including Jennifer Love Hewitt, Dave Navarro, No Authority, and Shia LaBeouf. More info: http://www.starmakermachinery.com/ .


"Fire And Ice" By Autumn Sky Wolfe
Watch this video on YouTube.