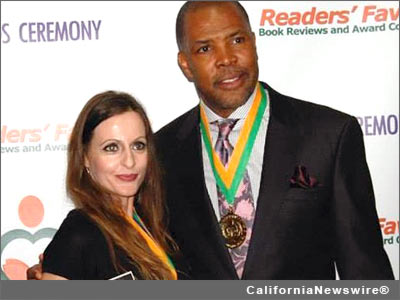 BURBANK, Calif. /California Newswire/ — Burbank's own self-confessed housewife by day and stripper by night author, A.A. Jones was recently acknowledged as a 2013 Readers' Favorite Silver Medal Winner in the Relationships category for her memoir, "Tilt Diary of a Virgin Stripper" (ISBN: 978-1257802869). The award ceremony was held in Miami.

"As a new author, I am honored to be acknowledged by Readers' Favorite," says Jones. "It is an incredible accomplishment and has fueled my determination to deliver the sequel to 'Tilt.' I'm also planning to eventually take the 'Tilt' to the big screen."

A corporate fitness and pole instructor as well as a dog behaviorist, A.A. Jones enthralled readers with the literary reveal detailing her moonlighting nightlife escapades. More than just a day-to-day account of a housewife thrown into the underground world of exotic dance, sex and drama, "Tilt Diary" emerged as an intimate, soul-bearing memoir of a woman making her way in a man's world and owning her power.

As demonstrated by Readers' Favorite, "Tilt" fueled the imaginations of readers around the world and also empowered and liberated its audience.

Founded by Debra Gaynor, Readers' Favorite is the fastest growing book review and award contest site on the Internet. Over the years Readers' Favorite has earned the respect of such industry giants as Random House, Penguin, and Harper Collins.

Tilt with Jones at http://tiltdiary.wordpress.com/ .