LOS ANGELES, Calif. — Audiolife, the Los Angeles-based Artist Services Company responsible for the development of a new media web-platform specifically designed for indie artists to sell music online and on-demand to fans, has released an in-depth report of findings on the future of selling CDs online. The report, “The New Way to Sell CDs Online: More Cost-Effective, Flexible and Profitable,” compares the Audiolife model to competitors like CD Baby and Nimbit, and provides clear quantitative data to support the advantages of using Audiolife. 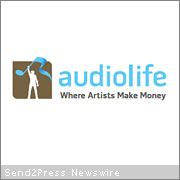 The data proves that artists who sell up to 2,500 CDs online will make more money through Audiolife than they would through traditional CD distribution outlets. There are currently hundreds of thousands of artists selling their CDs online that don’t sell more than 2,500 units. In fact, the average artist on CD Baby sells less than 5 CDs per year. This new model offers a cost-effective alternative that will allow artists to spend money on marketing themselves rather than upfront merchandise costs.

“Our goal with this report is to educate artists, record labels and the industry at large about the practical and economic advantages of using the Audiolife platform,” stated Brandon Hance, Audiolife Founder and CEO. “We believe that artists should be focusing on creating and marketing great music rather than worrying about logistics, vendor management and up-front merchandise costs.”

In addition to the financial advantages, the report explains the practical advantages of Audiolife such as speed to market, creative flexibility, and the removal of inventory management. This empowers artists to sell new products such as EPs, custom CDs for fans, and live concert albums that wouldn’t have been available otherwise.

Audiolife (www.Audiolife.com), a division of Inhance Media, is an Artist Services Company founded in 2005 by USC graduates Brandon Hance, Aaron Wiener, and Nishit Rathod. Based in Los Angeles, California, the company is currently in public beta and continues their dedication to empowering artists through new technology solutions.

Aurora Circuits Offers PCBs for Ventilators at No Cost