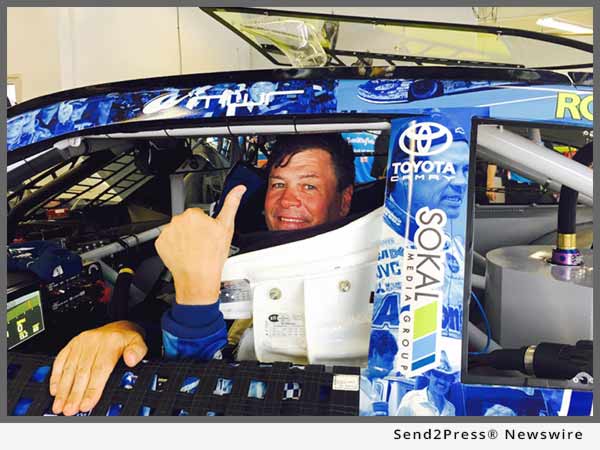 RALEIGH, N.C., Feb 20, 2017 (SEND2PRESS NEWSWIRE) — One of the Triangle’s largest advertising agencies, Sokal Media Group, announced today that they will support Michael Waltrip in his final race, the Daytona 500, on February 26, 2017. In a partnership with BK Racing, the Sokal Media Group logo will be prominently placed on the B Pillar located over the left shoulder of driver Michael Waltrip.

“We’ll be right there with him as he races to victory,” said Mark Sokal, CEO of Sokal Media Group. “My entire staff and I had the chance to sit down and talk with Michael about his career, goals in life and what it takes to be successful. After learning a little more about him and seeing his drive and passion I think I can say that everyone at Sokal Media will be pulling for Michael on Sunday as he tries for his third victory at Daytona.”

In January Waltrip announced that he would make his final run at the Daytona 500 and this appearance will mark his 30th in the “Great American Race.”

During qualifying on Sunday Waltrip said, “The Daytona 500 is my favorite event of the year. Having the chance to compete one more time is going to be fun. I appreciate Mark and everyone at Sokal Media Group for riding along on my Toyota with me.”

With headquarters in Raleigh, N.C. and offices in Morrisville, N.C., Sokal Media Group is the area’s largest advertising agency focusing on automotive advertising. Sokal Media Group is dedicated to growing business for their clientele through multiple marketing and advertising services. As a full-service agency, they manage the entire project from start to finish. Everything from media buying, radio and television production, ad design, direct mail, search engine marketing, website design, website maintenance, and many other products.

This press release was issued on behalf of the news source, who is solely responsible for its accuracy, by Send2Press Newswire. To view the original story, visit: https://www.send2press.com/wire/sokal-media-group-rides-with-michael-waltrip-during-final-race/

Sokal Digital to Partner with Stefan Parsons and BJMM in Daytona