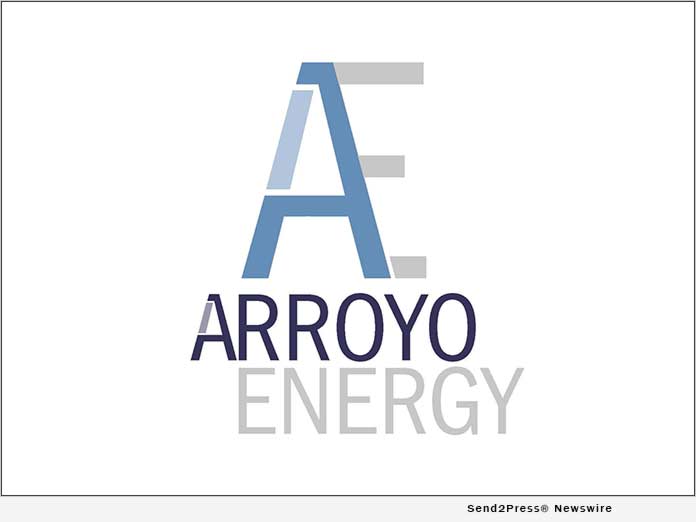 HOUSTON, Texas, Dec 18, 2020 (SEND2PRESS NEWSWIRE) — Arroyo Energy Investors, the Houston-based, independent infrastructure investment firm with a footprint in North and Latin America, today announced it closed three large refinancings totaling $821 million during the COVID-19 pandemic. The transactions were executed with several of Arroyo’s strategic lending partners and are illustrative of Arroyo’s experience with such transactions refined over the team’s 25+ years’ experience in the power industry.

The three refinancings, which closed between March and November of this year, were preceded by the execution of value creation initiatives at each of the following portfolio companies:

* ARCO I, a 219 MW renewable utility scale portfolio in Chile

“We are pleased that during these unprecedented times, we executed on the plan of delivering key commercial value-added initiatives followed by strategic refinancings at each of these portfolio companies,” said David T. Field, an Arroyo Founding Partner. “This is a testament to our significant relationships with major global project finance lenders across the United States, Mexico and Chile, as well as the strength of these assets, which are underpinned by long-dated contractual cashflows with credit-worthy offtakers.”

Details on each of the three project refinancings are as follows:

The $197 million refinancing is backed by contracted revenues with Duke Energy, one of the largest electric power companies in the United States. Prior to the refinancing, Arroyo successfully extended on behalf of Broad River its offtake agreement, securing continued gross margin. The Broad River refinancing was strengthened by an extension of the tolling contract with Duke and closed in March during the volatile period at the early stage of the COVID-19 pandemic. The financing was executed as an amend and extend with commercial lenders including CIT as Bookrunner, Joint Lead Arranger and Agent, Associated Bank as Joint Lead Arranger, and Siemens Financial and DZ Bank as lenders.

The $195 million Pemcorp refinancing, closed in September, is one of the first visible commercial transactions that was launched, executed and closed in the project finance energy infrastructure market in Mexico since the beginning of the COVID-19 pandemic. Prior to the refinancing, Arroyo successfully restructured on behalf of Pemcorp its 20-year offtake agreement with its customers, Kia Motors Mexico and Hyundai Engineering Mexico, resulting in increased contracted gross margin throughout the term. The financing was executed solely with commercial banks without reliance on any development financing institutions (DFIs) or development banks. SMBC and Natixis acted as Joint Book-Runners and Coordinating Lead Arrangers, ING as Mandated Lead Arranger, and post-closing, Siemens Financial Services and Intesa Sampaolo came in as lenders.

This refinancing totaled $429 million and includes ancillary DSR LC and working capital facilities. The facilities are backed by contracted revenues with Minera los Pelambres (“MLP”), a Chilean mining operation within the Antofogasta PLC, a large international mining group. The revenues are comprised of long-term offtake agreements with MLP from ARCO I’s Conejo and El Arrayan projects. Prior to the refinancing, Arroyo, on behalf of ARCO I, successfully restructured these two agreements, resulting in additional elements of downside protection for the remaining term. The financing closed in October and was led by Credit Agricole-CIB and SMBC as Joint Bookrunners, MUFG, Société Générale, as Mandated Lead Arrangers and Caixabank and Sabadell as lenders. Despite COVID-19 disruptions, market challenges in Chile and volatility around the U.S. election, the transaction was oversubscribed and was successfully distributed to a group of banks across different tiers. The financing qualifies as one of the largest green loans closed to date in Latin America.

Arroyo Energy Investment Partners LLC is a private equity fund manager with an investment focus in infrastructure projects throughout the Americas. Based in Houston with an office in Santiago, Chile, Arroyo is actively managing nearly $2 billion in assets.

This press release was issued on behalf of the news source, who is solely responsible for its accuracy, by Send2Press Newswire. To view the original story, visit: https://www.send2press.com/wire/arroyo-closes-821-million-in-global-refinancings-during-pandemic/

Expetitle Closes $2.3 Million Seed Plus Round